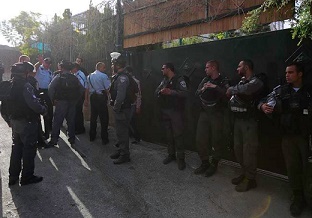 The Israeli army has kidnapped on Wednesday, at dawn, at least Twenty Palestinians in different parts of the occupied West Bank, while two of the kidnapped have also been shot and injured by the invading soldiers.Media sources in Tubas, in the central West Bank, have reported that the soldiers invaded the al-Far’a refugee camp, and kidnapped at least six Palestinians, including two who were shot by rubber-coated metal bullets.

The sources said that the soldiers invaded the refugee camp before breaking into and violently searching several homes, and kidnapping six Palestinians. The invasion led to clashes between the soldiers and local youth.

In the northern West Bank district of Jenin, the soldiers invaded Qabatia town, kidnapped two Palestinians and detained another resident at the Dotan roadblock, while many residents suffered the effects of tear gas inhalation in Deir Abu Da’if village.

Eyewitnesses said the soldiers kidnapped Lo’ay Mustafa Saba’na, 21, and Yousef Ali Kamil, 25, after breaking into their homes in Qabatia, and ransacking them.

In addition, soldiers stationed at the Dotan military roadblock, near Jenin, detained a Palestinian identified as ‘Ammar Taher ‘Amarna, and released him after briefly interrogating him.

Head of the Deir Ballout local council Kamal Yousef told the Palestinian News & Info Agency (WAFA) that the soldiers invaded the town around three at dawn, broke into and ransacked several homes, and kidnapped four, including two brothers.

In the West Bank district of Bethlehem, undercover forces of the Israeli military infiltrated into the Conferences Palace near the Solomon Pools area, between al-Khader and Artas town, south of Bethlehem, and kidnapped one employee identified as ‘Amer Sami Hajajra, 33.

In addition, soldiers also abducted a Palestinian from the ath-Thaheriyya town, south of the southern West Bank city of Hebron, as he was crossing the Container roadblock east of occupied East Jerusalem.

The resident in question, Khalil Ibrahim Abu E’qeila, 22, was heading to the al-Quds University, in Abu Dis, east of Jerusalem.

The soldiers also installed roadblocks at northern entrances of Hebron city, and the entrances of Halhoul, Doura and Sa’ir nearby towns, before stopping dozens of cars and inspecting the ID cards of the passengers.