165 Palestinians, Including 40 Children, Kidnapped In Hebron In September 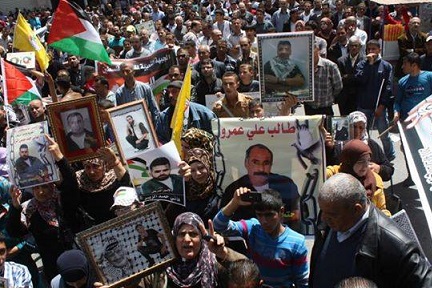 The Hebron office of the Palestinian Prisoners Society (PPS) has reported that the Israeli army kidnapped 165 Palestinians, including 40 children and 25 patients, in the southern West Bank district of Hebron, in September, and imposed high fines on many detainees.The PPS in Hebron said 70 of the kidnapped Palestinians have been moved into Administrative Detention, without charges, and that the soldiers kidnapped 40 children, 25 Palestinians who suffer from chronic diseases, 20 school and college students, and imposed fines mounting to 50.000 NIS on several detainees.

Head of the Hebron office of the PPS Amjad Najjar said most of the kidnapped Palestinians, and many family members, have been beaten and assaulted by the soldiers, who searched and ransacked their homes and properties.

Najjar added that the army issued arbitrary Administrative Detention orders against 70 detainees, forcing them behind bars without charges or trial for different periods.

He added that the Hebron district witnessed the largest number of kidnappings in the occupied West Bank in September, similar to several previous months.

Najjar further stated the soldiers are ongoing with their abuse and violations against the children, adding that the soldiers kidnapped 40 children (below the age of 17).

The PPS said the soldiers also kidnapped 25 Palestinians, who suffer from several chronic diseases and illnesses, and require constant medical attention and treatment.

Detainee Ibrahim Mahmoud al-Hammal, 40, suffers from meningitis (a bacterial infection of the membranes covering the brain and spinal cord), and detainee Faisal Talal al-Qawasma suffers from a heart disease, Hepatitis and Rheumatism.

Najjar said Israel uses the issue of the ailing detainees in an attempt to blackmail them and their families, in direct violation of the Third and Fourth Geneva Conventions that grants all prisoners the right to adequate medical care and attention.

Israel also stepped-up its illegal policies of imposing high fines, by imposing at least 50.000 New Israeli Shekels in fines against detainees from Hebron, in September alone.

Najjar stated that policy of imposing high fines is theft practiced by Israel against the detainees, and their families, especially amidst the very difficult economic conditions they face.

He demanded legal and international human rights groups to act on ending the escalating Israeli violations of International Law, the Fourth Geneva Convention, and every Human Rights treaty, and to oblige Tel Aviv to stop its violent arrest campaigns, and ongoing invasions, destruction of property and assassinations.

In related news, Israeli soldiers of the Nahshon Battalion Brigade, operating in prisons and detention camps, invaded on Wednesday various rooms of Palestinian detainees in different sections of the Ramon Israeli Prison, and attacked several them.

The PPS said the attack is the second this week, after the soldiers invaded Section 3 of the prison, attacked a number of detainees, and moved two Palestinians, sentenced to high terms, into interrogation. The two have been identified as Omar Kharwat and Osama Sallal.