Abbas: “We Will Join ICC Should Our Sec. Council Bid Fail” 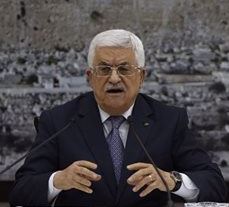 Palestinian President Mahmoud Abbas said that the Palestinian Authority would go ahead with its plan to join the International Criminal Court, should the Palestinian UN Security Council bid for setting a time frame for ending the Israeli occupation fail, or be vetoed by the United States.Abbas made his statement during a meeting with reporters and writers at his Ramallah office, in the central West Bank.

“We have already started the preparations for filing the application at the Security Council,” Abbas said. “We are seeking our right to an independent state with East Jerusalem as its capital, we want a clear timetable, a year, two or three, to end the occupation, but we want the period clearly defined.”

Abbas further said that the Palestinian Authority wants to resume direct peace talks with Tel Aviv, but this cannot happen before having a clear and internationally recognized agenda for setting the borders of the future state, and setting a clear time frame for peace talks.

He added that the P.A needs three weeks to present the proposal to the UN Security Council, and that the bid needs nine votes to pass, and affirmed that Palestinians realize the fact the United States will veto the resolution.

“Should the U.S. use its veto power, then we will file more applications to join international organizations and treaties,” Abbas added. “The first application will be to join the International Criminal Court.”

He also stated that a failure in the Security Council would lead the P.A to reexamine its relations with Tel Aviv, including the security coordination in the West Bank, adding that more Palestinian voices are demanding an end to this coordination.

“We will reconsider everything, in fact,” Abbas elaborated. “There are ties with Tel Aviv…”

However, the President said the P.A will not allow armed clashes with Israel, and stated “we will not allow the firing of even one bullet, we have a political front to battle; it is even more difficult and more important.’

Abbas also said that the current relation with the White House is tense, and described the latest American statements regarding his speech at the UN last Friday as “funny.’

“The situation is tense; it is not in our interest to cause more tension, “ he said. “But we also cannot back down now; we will head to the Security Council; the political confrontation will be fierce.”