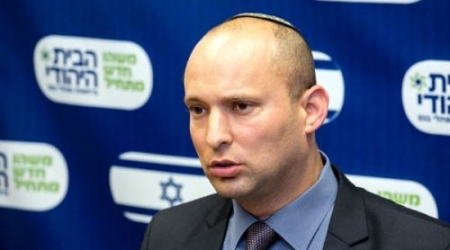 Israel’s Minister of Economy Naftali Bennett has described the recent settler takeover of Palestinian houses, in the neighborhood of Silwan, occupied East Jerusalem, as a ‘historic achievement.’ On Wednesday morning, Israeli settlers stormed al-Aqsa Mosque again, under police protection.According to Al Ray Palestinina Media Agency, Bennett welcomed what he described as ‘housing Jews in several houses in the Silwan neighborhood of East Jerusalem’, during a visit to a number of houses in the neighborhood, last night.

Israeli radio quoted him as saying, ‘The seizure of these houses is an achievement, as it makes the majority of the population Jews.’

On Tuesday, settlers seized 10 buildings belonging to Palestinians in the Silwan neighborhood, supported by the association for illegal settlement of ‘Elad’ and the protected by the Israeli police.

Today, according to Director of Media at Al-Aqsa Foundation for Waqf and Heritage, Mahmoud Abu Atta, “over 85 Israeli settlers entered the compound through al-Magharba gate and tried to perform Talmudic rituals.”

He added that the settlers tried to ascend Dome of the Rock, but that the worshipers confronted them.

.
Eyewitnesses said that Israeli forces continued to close the gates of the mosque, preventing Palestinian worshipers from accessing its courtyards. Women of all ages, in addition to men under the age of 50, are regularly prevented from entering Al Aqsa.

Abu Atta further stated that Israeli authorities have imposed special measures gor Eid al-Adha, especially over Friday and Saturday, because these days coincide with the Jewish holiday of Yom Kippur. On this day, vehicle movement in streets is not allowed.

Additionally, during the days of Eid al-Adha, the mosque will be closed to foreign tourists and Jews, and Mr. Abu Atta expects that incursions will renew following the holiday.

About 217 Israeli settlers stormed the mosque, on Tuesday, under protection of special Israeli police.

For more background info regarding the sensitive nature of this topic, see IMEMC’s coverage of Tuesday’s invasion.