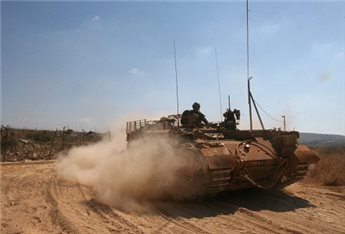 Israeli military vehicles carried out a limited invasion into the southern Gaza Strip, early Wednesday, with soldiers opening fire towards Palestinian farmlands, and nearby homes, locals said.Ma’an News Agency has reported that twelve military vehicles advanced into the area from a gate east of the town of al-Fakhari, in the Khan Younis district, reportedly crossing some 200 meters into the area.

Soldiers scanned the vicinity before firing shots towards Palestinian farms, and various homes, in yet another apparent ceasefire violation.

Workers were forced to leave their fields, though no injuries were reported.

An Israeli army spokeswoman stated that she was ‘looking into the incident’.