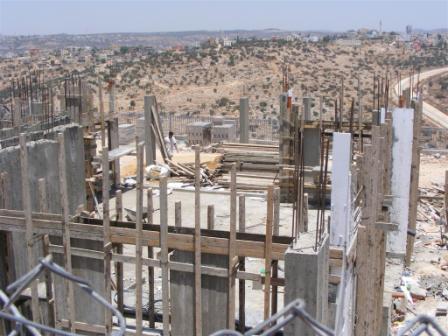 The Civil Administration Office of the Israeli army, in the occupied West Bank, issued a decision on Wednesday to confiscate Five Dunams (1.23 Acres) of Palestinian lands to expand a road section used by settlers of the illegal Adam settlements, east of Jerusalem.Israeli sources said that the plan is meant for expanding road #437, near the Palestinian town of Hezma, and that the new section would “reduce traffic jams on the main road’ linking occupied Jerusalem with Israeli settlements in the central West Bank district of Ramallah.

The Civil Administration did not provide any information, so far, of what would happen to a number of Palestinian homes in the area which Israel intends to confiscate.

Israeli Peace Now Movement said in a statement on its webpage that about 35% of the occupied West Bank is under the jurisdiction of settlements’ ‘Regional Councils”.

Peace Now additionally stated that this means “an additional one-third of the West Bank became off-limits to the Palestinians, and under the control of settlers.

The group asserts that settlements led to the confiscation of hundreds of kilometers of lands in the West Bank to build roads leading to them, and to connect them to each other and to Israel.

Settlements, and their roads, are spread all over the West Bank, separating Palestinian communities from each other, and lead to severely hindering the movement and access of Palestinians.

“These roads do not only deny Palestinian contiguity; they also occupy a significant amount of land that became off-limits to the Palestinians,” Peace Now stated.