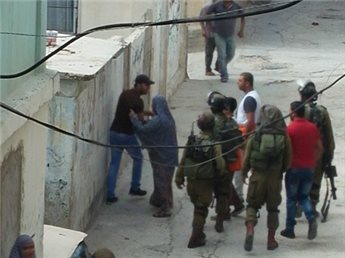 Israeli forces, on Wednesday evening, raided a Palestinian home in the Al Aroub refugee camp, to the north of Hebron city, in the southern West Bank, where they assaulted a number of family members.The owner of the home, one Khamis Awad al-Badawi, age 59, told Ma’an News Agency that Israeli soldiers broke into his home and damaged sections of its interior before deploying to the rooftop.

Mr. al-Badawi’s had apparrently just underwent coronary cauterization, that same day. In addition, one of his sons, Ahid, age 16, suffers from cancer. br />

The soldiers additionally kept Mrs. al-Badawi outside the house for more than two hours, upon which they forcibly took al-Badawi and his sons to a military watchtower on the other side of the road and were beaten for hours before being set free.