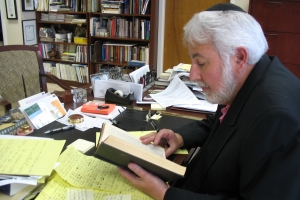 As Jewish congregations around the world gathered this past week to celebrate Rosh Hashanah, the Jewish New Year, the members of one synagogue, located near Atlanta, Georgia were subjected to a diatribe against Muslims and a call for a ‘Holy War’ to ‘exterminate the savages’.This is not the first time that Rabbi Shalom Lewis of Congregation Etz Chaim in Marietta, Georgia has given a sermon demonizing Islam. Three years ago, also on Rosh Hashanah, he gave a similar talk comparing Muslims to Nazis and warning of the coming wave of Islam that would end up wiping out Jews and Christians, and calling for a war against Islam.

This year’s speech is filled with racist platitudes, demonizing the religion of Islam, and calling for a new World War against Islam.

At one point, Rabbi Lewis says of Muslims, “We are dealing with a moral species that eats its own, kills it’s young and celebrates innocent death as homage to God.”

He says of Muslim residents of Europe, “There is a cold darkness settling on Europe. A nihilism. A corruption. A perversion in the name of Allah. A Kristallnacht of European and Western culture is coming that will destroy a millennia of creative genius.”

He ends his speech with a call to action: “These Islamist criminals are unlike us in the most basic of ways and we have yet to accept and understand their total immersion in moral debauchery.

According to Adam Horowitz of Mondoweiss.net, “It’s as hateful as any you would expect from any fringe religious demagogue. Except Lewis isn’t a fringe figure. As the website Loonwatch points out, Lewis was given commendations by the Georgia legislature and the US House of Representatives. He has been at Etz Chaim for nearly 40 years. In fact when he recently announced his retirement in 2017, congregation President Cheryl Miller said, ‘Rabbi Lewis will continue to be an active participant in the leadership of our congregation, a wealth of information and resources, a trusted friend, and a role model to our future clergy.’ This man who has called for the annihilation of millions of people is apparently a beloved figure.”

You can read the whole speech, along with Adam Horowitz’ response, at the link below