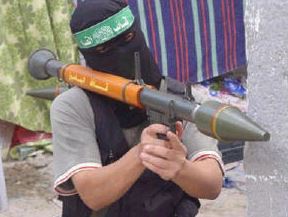 A senior Israeli military commander accused Islamic Resistance Movement (Hamas) in Gaza, on Sunday, of violating the cease-fire, mediated by Egypt, by “test-firing” a missile into the sea.The commander told the Israeli Army Radio that “Hamas test-fired several missiles,’ and that Israel managed to uncover the “Hamas experiments” through satellite surveillance.

He added that the Alarm System in a number of Israeli settlements, close to Gaza, was sounded several times in the past few days, as it managed to detect the missiles, although they were fired into the sea.

He alleged that Hamas has violated the ceasefire agreement, adding that the deal states, “Hamas should not try to advance its power, or smuggle weapons into Gaza.’

He said Israel would stress on the issue during upcoming indirect talks in Cairo, and the anticipated agreement.

An Israeli army spokesperson told Maariv Israeli newspaper that Hamas resumed its experiments to advance its “rocket system”, and that the movement test-fires its missiles in the sea to develop its capabilities and power.

The Hamas movement has repeatedly affirmed that the agreement does not include disarming the resistance, and that armed resistance factions in the coastal region will never agree to disarm.

Hamas said the ceasefire agreement calls for ending the deadly Israeli siege on Gaza, rebuilding Gaza, rebuilding and operating the airport (that has been repeatedly flattened, shelled and bulldozed by Israel), establishing an international sea port in Gaza, and abolishing the “buffer zone” east of the Gaza Strip, as its prevents farmers and workers from entering their lands.

Other issues include expanding the fishing zone in Gaza waters, ending the ongoing Israeli assaults against the fishermen, and allowing the entry of construction materials into the coastal region.

On 26 August, a ceasefire between Israel and Hamas was agreed, ending a war which killed some 2150 Palestinians (mostly civilians) and 73 Israelis. Indirect talks are supposed to resume in the last week of this month. http://www.imemc.org/article/69213