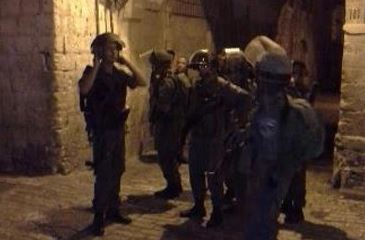 Eyewitnesses have reported, Tuesday, that clashes took place between dozens of local youth and Israeli soldiers and police officers, after the army imposed further restrictions on the entry of Muslims into the al-Aqsa mosque, in occupied Jerusalem, on the last day of the Muslim al-Adha holiday. Local sources said that the soldiers, and the police, escalated their strict measures limiting and preventing the entry of hundreds of worshipers into the mosque, especially the few who were allowed to leave Gaza and head to Jerusalem for Eid prayers.

The clashes mainly took place near the Bab al-Majlis (The Council Gate) and Hatta Gate in the Old City of occupied Jerusalem.

According to Israeli sources, some protesters threw Molotov cocktails at the soldiers and the police, causing minor injuries; the police sealed the entire area and invaded it.