Palestinian Injured After Settlers Attack Villagers In The Orchards 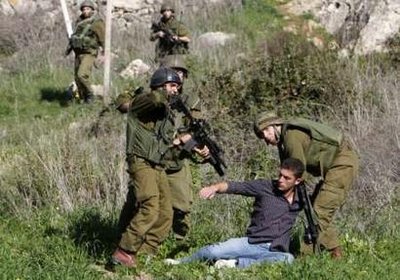 Palestinian medical sources have reported, on Tuesday evening, that a man was injured after a number of extremists Israeli settlers attacked villagers who were picking their olive trees, in Palestinian orchards at Burin village, south of the northern West Bank city of Nablus.Local sources said that the man, identified as Mahmoud Raja, suffered several injuries after being struck by stones thrown by the settlers as he was picking his olive trees with his family.

The sources added that the settlers tried to remove the villagers from their own orchards before Israeli soldiers arrived at the scene and attacked the villagers instead of removing the assailing fanatic settlers.

On Monday, a number of settlers cut off the branches of 100 olive trees owned by Palestinian farmers from the Bani Yasouf village, near Nablus. The settlers came from the illegal settlement of Taffouh.

Another group of settlers also damaged 20 olive trees owned by Palestinian farmers from the village of Awarta, near Nablus.

Fanatic settler groups usually escalate their attacks against the villagers during and shortly before the olive harvest season.

Besides physical attacks against the Palestinians, the settlers carry out repeated attacks which include cutting dozens of trees, burning orchards and farmlands, and even flooding farmlands with settlement sewage.