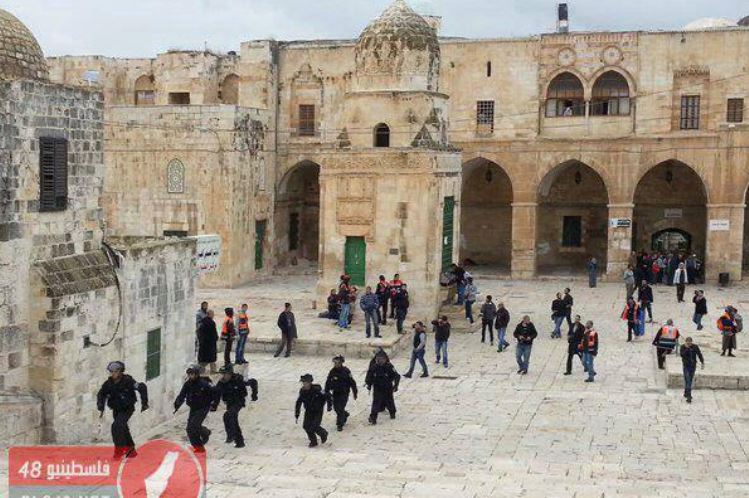 Palestinian medical sources have reported that dozens of residents have been wounded when Israeli soldiers and settlers invaded the yards of the Al-Aqsa Mosque, in occupied East Jerusalem, and attacked dozens of worshipers.The sources said that the soldiers threw gas bombs, concussion grenades and rubber-coated metal bullets at the Palestinians in the yards of the mosque and even into the interior of the al-Qibli mosque.

The attack took place after dozens of Israelis tried to invade the mosque while marking the Sukkot feast.

Mosque guards said dozens of soldiers have been deployed all around the mosque area, especially the al-Magharba Gate, and that the attack itself took place around 7:30 in the morning.

They said the attack was sudden while hundreds of worshipers were there before hundreds of soldiers invaded the mosque area, assaulted the worshipers and tied to force them out.

The attack led to clashes between the Palestinians, the soldiers and a group of fanatic Israeli settlers who accompanied them.

On Tuesday at dawn, Israel imposed strict measures restricting the entry of Muslim worshipers into the al-Aqsa Mosque.

All Palestinian men below the age of sixty have been denied access to the mosque and its surrounding areas, while the army withheld the ID cards of elderly Palestinians, and women of different ages, an issue that led to further tension.

Later on, the soldiers removed all Palestinians from the yards of the mosque, and surrounded dozens of youths who fortified themselves into the Al-Qibli mosque, after the soldiers shut its gates with chains.

Head of the Waqf and Endowments Department in Jerusalem Sheikh Azzam Khatib said the department filed an official application to the Israeli Authorities in Tuesday asking them to close the al-Magharba Gate to prevent the entry of fanatic settlers into the mosque area, but the police ignored their request.

Khatib added that he contacted the Jordanian Ambassador and informed him of the attack.

“Due to calls for invading the mosque by extremist Israeli figures, especially during Jewish Holidays, the mosque became subject to frequent and escalating violations,” Khatib said.

Head of the Al-Aqsa Mosque, Sheikh Omar al-Kiswani, said the clashes are still ongoing, adding that many Palestinians have been injured, especially in the al-Qibli mosque, while fires broke out in the carpets due to Israeli gas bombs and concussion grenades,.

He added that the soldiers prevented local firefighters from entering the area.

“The mosque is nearly empty now after the soldiers forced the Palestinian worshipers out,” al-Kiswani stated. “They removed the Palestinians and are allowing Israeli fanatics to roam freely.”