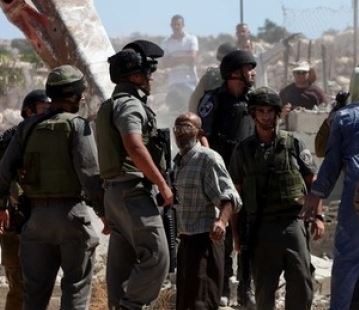 Several Israeli military jeeps invaded, on Tuesday evening, the Wadi an-Nees area, south of the West Bank city of Bethlehem, upon which soldiers handed nine families military orders to demolish their under-construction homes, under the pretext of being built without construction permits.Head of the Wadi an-Nees village council Yousef Abu Hammad said dozens of soldiers invaded the village, and handed the warrants to the families, informing them that they have 45 days to file official appeals with the Israeli Supreme Court.

Abu Hammad added that similar orders were handed to the families eight days ago, on September 30.

Israeli largely denies construction permits to Palestinian families in their own lands, in Area C (approximately 61% of the West Bank) under full Israeli military and security control.

While the Palestinians are losing their lands and orchards in Area C, are largely denied access to what is left of their lands that became isolated behind the Annexation Wall, and are denied the right to build, Tel Aviv continues its illegitimate policies of the construction and expansion of Jewish settlements.