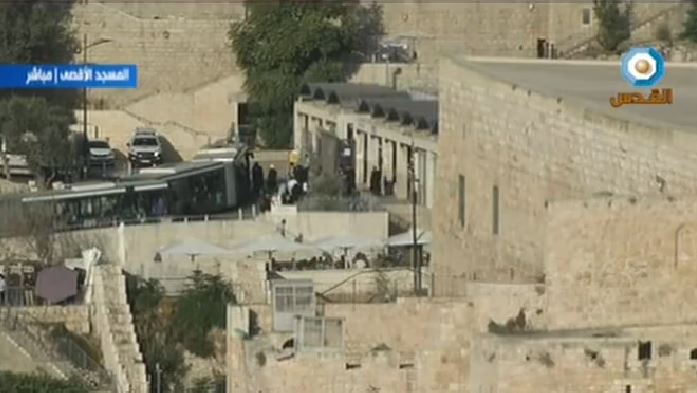 Archbishop Attallah Hanna, of the Greek Orthodox Church in occupied Palestine and Jerusalem, strongly denounced the Israeli military and fanatic Israeli groups who attacked and invaded the al-Aqsa Mosque in occupied Jerusalem.Hanna said that the attack is a very serious violation targeting, again, not only one of the holiest Islamic sites, but also the Palestinian history, heritage and identity.

“The attack on this holy site is an attack on all of us, and attack on our history, culture and heritage” he said. “We cannot just stand idly; there must be a swift Arab position to counter Israel’s aggression that targets our very history and presence as Arab Muslims and Christians.”

The archbishop further stated that he is concerned about the silence of Arab and Islamic countries while Israel continues, and escalates, its attacks and violations against Islamic and Christian holy sites in Palestine, especially in occupied Jerusalem.

“Attacks on Islamic sites, on the Al-Aqsa Mosque, are attacks on all of us as Muslims and Christians,” he added. “The same way, attacks on our churches are attacks on every Arab, and every Palestinian.”

“We, as Palestinian Christians, stand with our Muslim brothers, and affirm the Islamic-Christian unity; unity is the best means to counter these attacks and racist acts,” the Archbishop added. “We, as Arab-Palestinian Christians, are an important part of the Arab history and struggle. We will remain united with our Muslim brothers to counter colonial policies that aim at destroying our unity and our history.”

On Tuesday evening, Israeli soldiers prevented all Palestinians below the age of fifty from entering the al-Aqsa Mosque, an issue which led to clashes between dozens of soldiers and Palestinian youth in the mosque area, and in different parts of occupied East Jerusalem.

On Wednesday, Israel decided to prevent all Muslim worshipers from entering the mosque, and the soldiers attacked the worshipers who managed to stay there, and fired gas bombs in the mosque itself and around it, causing dozens of injuries.

Many Palestinians have been recently kidnapped, and dozens injured, in repeated violations by soldiers, police officers and fanatic Israeli groups targeting the worshipers in the mosque and around it.

Israeli Prime Minister Benjamin Netanyahu called on the police to act in ending all Palestinian protests at al-Aqsa Mosque, and in occupied Jerusalem, and ordered more soldiers and police officers into the area.