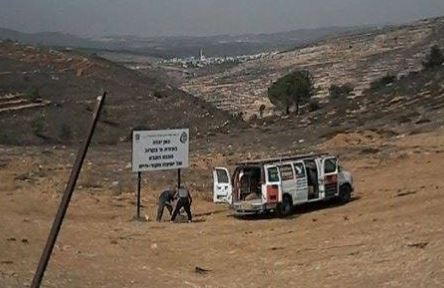 Israeli soldiers invaded, on Thursday, Palestinian agricultural lands belonging to residents of al-Khader and Nahhalin town, southwest of Bethlehem, and declared them a closed military zone.Ghassan Najajra, a nonviolent activist with the Popular Resistance Committees against the Wall and Settlements, stated that the army confiscated by force three Dunams of Palestinian lands in Sirb at-Teen area, close to the illegal Daniel settlement, built on lands belonging to al-Khader.

Najajra added that the soldiers bulldozed the lands, and placed signs declaring them a “closed military zone” and another sign stating that Israel will be building “public gardens” for Jewish settlers living in nearby illegal settlements.

He further noted that the army informed the owners that their lands are now “state-owned,” and off-limits to the Palestinians.

Eight months ago, the soldiers confiscated around 900 Dunams of lands belonging to al-Khader, Nahhalin, Beit Ummar and a number of nearby Palestinian villages. (One Dunam = 0.247 Acres)