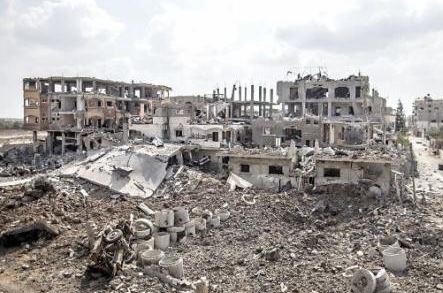 Secretary-General of the United Nations, Ban Ki-moon, arrived in the Egyptian capital of Cairo, on Saturday, to attend the Sunday meeting for rebuilding the Gaza Strip which was recently ravaged by Israeli missiles, during the latest offensive on the coastal region. Several world leaders also arrived in Egypt in preparation for the conference.The conference will be attended by representatives from various countries around the world, while many world leaders have already arrived in Egypt to attend.

Officials from several countries will attend the reconstruction conference, along with representatives from around twenty organizations from the region and internationally, including the World Bank and the International Monetary Fund.

U.S. Secretary of State John Kerry also intends to be present at the conference.

The Israeli army bombarded entire neighborhoods in different parts of the Gaza Strip, in thousands of air strikes, artillery and tanks shellings, and even with missiles fired from Israeli navy boats into this impoverished, most densely populated area in the world.

Palestinians, and various international officials, say that reconstructing Gaza, following the 50-day Israeli assault, requires around $4 billion in aid, while donor states are concerned that, without a solution to the conflict, another war is likely to occur even within a year or two.

Statements from the US indicated that the conference would unlikely be able to procure the requested pledge of $4 billion in aid to rebuild the region. In September, the United States pledged $118 million in humanitarian aid to Gaza.

With a new interim government in the occupied territories, the Palestinian Authority is hoping to be able to deploy its security forces in the Gaza Strip, in a move that is hoped “to encourage donor countries to fund the reconstruction.”

Tel Aviv will not be participating in the conference, while the U.S. has asked it to “facilitate humanitarian assistance to Gaza”.

However, the conference will focus on the reconstruction of Gaza, while the US and Saudi Arabia have pledged to provide humanitarian assistance to the people of Gaza. It is cosponsored by Norway and Egypt, in cooperation with United Nations, the Arab League and the European Union.

Although the US, Israel and a few other countries opposed the Palestinian Unity Government agreement, and reconciliation between Fateh and Hamas, they are hoping that the unity agreement “will enable the Palestinian Security Forces to control Gaza, and take it out of the grip of Hamas”, who garnered an overwhelming victory in the 2006 election.

The newly elected government was almost instantly shunned and isolated, while most elected West Bank legislators and government ministers were kidnapped, and held for an extended period under arbitrary Administrative Detention orders without charges or trial.

Israeli missiles and shells have killed more than 2137 Palestinians, including at least 578 children, 264 women, and 103 elderly, while more than 11100, including 3374 children, 2088 women and 410 elderly, have been injured. Some 67 Israeli soldiers and 3 civilians have been killed, with dozens injured.

The United States provides Israel with billions of dollars in direct security and military aid, in addition to advanced weaponry, joint military drills and direct economic cooperation which, in retrospect, makes it the financier of the ongoing Israeli military occupation, illegitimate settlements and continuous violations against the Palestinian people and their property.