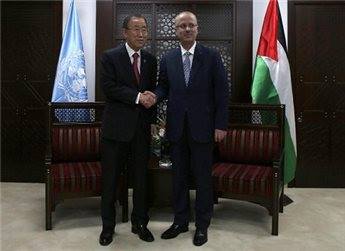 UN Secretary-General Ban Ki-moon, on Monday, expressed strong dissent to Israeli settlement building and warned against ‘provocations’ at Jerusalem’s holy sites, calling for renewed peace talks in order to avoid further conflict with the Palestinians. UNRWA Commissioner-General Pierre Krähenbühl has pledged to not allow Gaza to return to its state prior to ‘Operation Protective Edge’.Ban was in the West Bank city of Ramallah, recently, where he met Palestinian prime minister Rami Hamdallah, just a day following the official reconstruction conference in Cairo, at which international donors pledged some $5.4 billion to rebuild the war-torn Gaza Strip.

‘The amount that has been committed, pledged by the international community is quite encouraging,’ Ban said at a joint news conference with Hamdallah, AFP reports:

The funds would go towards the ‘urgently needed’ reconstruction of infrastructure and homes, he said, referring to an ‘unprecedented’ level of destruction in Gaza where nearly 2,200 Palestinians were killed during Israel’s summer-long assault on the region.

But ‘while rebuilding is important, we must tackle the root causes of instability,’ Ban further stated.

‘We must give renewed attention to the West Bank.

The White House and European Union have slammed Israel’s approval in September for 2,600 new settlement units in Israeli-annexed East Jerusalem.

The continuing issue of illegal Israeli settlements has caused the breakdown of numerous rounds of Israeli-Palestinian peace talks.

‘I am also deeply concerned by repeated provocations at the holy sites in Jerusalem. These only inflame tensions and must stop,’ Ban said.

The site is holy to both Jews and Muslims, and is an underlying cause of Israeli-Palestinian tension, which has heightened in Jerusalem since the Gaza conflict.

Ban called for the two sides to revive a stagnant peace process that collapsed in April despite intense US efforts.

‘I urge Palestinians to show courage and continue engaging in the … peace process … (and) Israelis to do the same,’ Ban said.

‘I welcome renewed international political leadership and action. Time is not on the side of peace…

‘We need to act immediately to prevent a deepening of an already unsustainable status quo … this is the only way to avoid yet another tragic conflict in the future.’

Just prior to Sunday’s reconstruction conference in Cairo, UNRWA Commissioner-General Pierre Krähenbühl pledged not to allow Gaza to return to its state prior to the Israeli aggressions beginning in early June of 2014.

According to Al Ray, Mr. Krähenbühl stated that lifting the siege on the Gaza Strip is a crucial task, and should be worked on because of its illegal nature and the obstacle which it represents for Gaza’s hopes and ambitions.

With regard to the support of Arab countries, Krähenbühl said that they supported UNRWA, yet still, however, the reconstruction process must begin now, as winter approaches for the region and the suffering dramatically increases.

The UN official stressed that demolished homes in Gaza should be rebuilt as soon as possible.