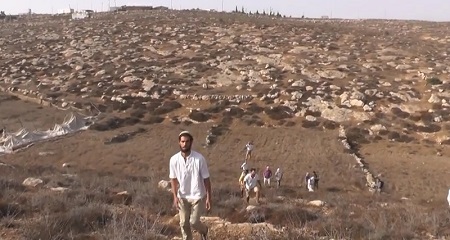 The incident caught on camera in this video took place on Saturday, October 11, 2014, near Mitspe Yair illegal Israeli settlement outpost, in the South Hebron hills, in the Hebron district in the southern part of the occupied West Bank. A number of right-wing Israeli settlers were attacking Israeli peace activists, and pushing them away. The peace activists are with Ta’ayush (Coexistence), an organization of Israeli and Palestinian peace activists nonviolently opposing the occupation of Palestine, and working for full civil equality.

The Ta’ayush activists were accompanying Palestinians from Awad and Jabareen families to their lands, close to the illegal Israeli outpost, where right-wing settlers frequently assault them.

The attack took place in front of Israeli soldiers who were at the scene, watching the settlers attack the Israeli peace activists.

The soldiers did not do anything to prevent the attack, and Israeli police officers were also deployed nearby – but they, too, did nothing to stop the attack.

Ta’ayush said the soldiers, who frequently fail to act to stop settler violence, on this occasion once again refused to stop the attacking settlers, and did not apprehend any of them.

The person shooting the video narrates:

There is violence by settlers here, against Palestinian shepherds, and Israeli leftists. There are soldiers who are seeing everything, in Mitzpe Ya’ir, in the Hebron region.
There are police here, up (the hill) that are overlooking the violence, and the soldiers are right there and are not doing anything.
So, I am asking to please urgently send the Police here. Urgently send police here.

Activist shouting again: Leave me alone.
Cameraman: The soldiers here are not doing their job, people are attacking us.
Soldiers: Can you please go back a little bit?
Cameraman: There is a group of 10 to 12 settlers here; they are using violence, (sentence breaks in the middle)
Settler yelling in the background: Ashkenazi! (referencing a stereotypical stigma in Israeli society about white western European, leftist Jews) Of course I am going to push.

Everybody then starts pushing, and at this point in the video (02:03) a female peace activist tells a soldier

“You should do something, please stop the violence, he is attacking me… No!…”

Settler: Of course I am attacking you, this is my land. Why would I not attack you?
Female activist: This is not your land.
Settler: It is my land; it is my father’s land.
Camera then moves to two settlers attacking an activist, with the soldiers behind the settlers.
A voice off-camera says: Soldiers look here, soldiers look here, please pay attention to what is happening here.
Female activist: Please stay away from me.
Settler: Get out of here already. Go away, go away…