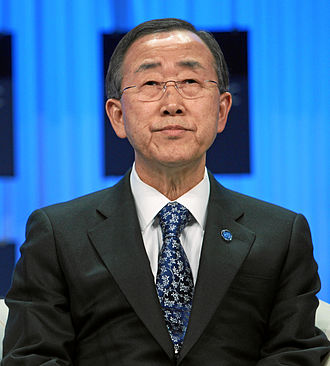 I have had a deeply moving, unforgettable day. I am very humbled by what I saw here in this school. Meeting children, I am very inspired by their strength and courage.

It was very important for me to be here and to listen directly to teachers and the children. What their concerns are. How they have to be able to overcome this tragedy.

I know there is great deal of sadness, frustration, and even anger.

I fully understand their concerns and difficulties.

The enormous destruction in Gaza is a source of pain to me personally and it’s a shame to the international community.

I stand with you.

The United Nations staff – who showed great courage and commitment throughout the conflict – stand with you.

The whole international community stands with you.

I know the needs are massive.

No amount of Security Council sessions, reports or briefings could have prepared me for what I witnessed today.

I talked with families still reeling in grief.

I just met a young man who lost his two legs. He lost his brothers and sisters. It is very sad and heart breaking.

And I met so many of the beautiful children of Gaza.

More than 500 were killed during the conflict – many more were wounded.

What have they done wrong?

Being born in Gaza is not a crime.

Perhaps nothing so powerfully symbolizes this summer of suffering than the Jabalia school.

Thousands of women, children, families were forced to flee the intense hostilities.

They sought sanctuary under the UN flag.

All of the details related to the location of this facility were shared with Israeli military authorities again and again.

Yet the shells fell.

The shelling of United Nations schools is absolutely unacceptable.

These actions must be fully and independently investigated.

I repeat my call for accountability.

Over the summer, weapons were also found in empty schools. We informed the world.
United Nations facilities must be inviolable.
My visit today to the school and to Gaza has reinforced my conviction that there is no time to lose.

There can be no peace in the Middle East, no security for Israel, while the crisis in Gaza festers.

The mindless pattern of blockade, rockets and destruction must stop.

I repeat here in Gaza: the rockets fired by Hamas and other armed groups must end. They have brought nothing but suffering.

We now have a chance to move ahead.

Despite the destruction, there are signs of hope: the international community mobilized $5.4 billion in aid for Gaza reconstruction.; The Government of National Consensus has brought together Palestinian factions that have too long been divided; the agreement between Israel, the United Nations and the Palestine government should help bring in critical supplies before the winter months.

I am pleased to announce that the first truck brining in cement and other construction material has arrived today.

These are important building blocks for a better future for the Palestinians of Gaza, but they are not sufficient by themselves.

I am committed to doing everything possible in my power to support political efforts to finally end the nearly half century of occupation, ensure Israel’s legitimate security needs and establish peace once and for all.

Notwithstanding the difficulties, I leave Gaza with hope. It starts here.

The Jabalia school is open. Children are back in school.

Not long ago, this was the site of terrible tragedy. Today it is a symbol of resilience – of learning – of the possibility of a better day.

I know the people of Gaza are not asking for handouts.

They want dignity and decent jobs – they want education and opportunity.

That spirit will continue to inspire me as we work for the peace, justice and prosperity that the people of Gaza so long deserve.

Again, I am here to bring strong solidarity of the United Nations and the international community to the people of Palestine.

Q: Are you concerned that with the tripartite mechanism for managing materials into Gaza that the UN is in charge of a mechanism that Israel has a veto over, in other words, the UN is not ending but managing the siege?

SG: That is one of the most important issues: lifting the siege and easing movement restrictions. That is a basic human right for all the Palestinian people. One first step is that we made an agreement between the UN, the Israelis and the Palestinians under which we will facilitate the speedy, efficient and effective delivery of goods and also for the free passage of people. The UN will continue to facilitate dialogue and negotiations between the Palestinians and the Israelis to achieve that goal.

Q: Are your sure that there will be accountability for Israelis that have committed crimes? How are you going to solve this problem?

SG: As I said repeatedly in past, there must be accountability and I again repeat my call for accountability. Those who have committed criminal acts, those who have violated international humanitarian law must be investigated and brought to justice. As you know, the UN Human Rights Council has established a commission of inquiry which is now investigating. Upon our strong urging the Government of Israel has established their own independent, criminal investigations. I, as Secretary General of the United Nations, am considering establishing my own Board of Inquiry to investigate the shelling of the UN facilities and killing of UN staff. With all these three Commissions and Boards of Inquiry I am sure we will be able to find and bring justice.

Q: The mechanism will put the UN in charge of the blockade, what do you say to that?

SG: This is a very important question. The UN will make absolutely sure that the mechanism will work in a full, timely and effective way. Yesterday I had discussions on this issue with Prime Minister Netanyahu of Israel and made it clear that all deliveries of construction materials must be delivered in a timely manner, effectively, swiftly and without bureaucratic obstacles. The UN system will fully engage in this. Mr Robert Serry, the UN Special Coordinator of the UN Special Coordinator’s Office in Jerusalem, will continue to monitor this closely and discuss with the authorities concerned. In addition to this we are asking the authorities to open all the crossings and ease restrictions so that there can be free movement in and out of Gaza.

Q: Is Israel’s occupation of the West Bank including East Jerusalem and Gaza illegal under international law? If so what objections do you have to a Security Council resolution fixing a date for ending the occupation?

SG: This is one of the fundamental underlying issues, ending the occupation and lifting the blockade that I have been urging the parties, the Palestinians and Israelis, to address. Without addressing fundamental root causes there cannot be any sustainable peace and security. Vitality cannot be assured. That is why the UN has been continuously and constantly urging the parties to address this issue. I raised this issue with the Israeli Prime Minister and the Palestinian President and Prime Minister, urging them to sit down and address these issues.