17 Palestinians Kidnapped, Many Injured, In Jerusalem 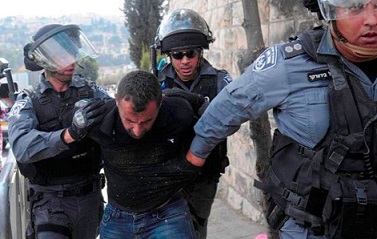 Israeli soldiers and police officers kidnapped, on Wednesday evening, at least seventeen Palestinians near the al-Aqsa Mosque, in occupied East Jerusalem, while many residents have been injured, in renewed clashes.Local sources said the army denied the Palestinians access to the al-Aqsa Mosque, for the second time this week, in order to allow dozens of Israeli fanatics to storm the compound.

The Maan News agency said that clashes continued late on Wednesday in al-Isawiyya town, Jabal al-Mokabber, and various alleys and neighborhoods in occupied East Jerusalem, while at least seven Palestinians were injured in al-Isawiyya, when the soldiers fired rubber-coated metal bullets, gas bombs, and stun grenades.

The Police also kidnapped four children in allegedly after they threw stones at Israeli military vehicles.
In addition, the soldiers kidnapped a 12-year-old child, identified as Salim ‘Oweisat, in addition to a teenager who remained unidentified.

The police and the army in the Old City of occupied Jerusalem also kidnapped at least five Palestinian teenagers.

Furthermore, a young Palestinian woman and her brother were injured by army fire in the African neighborhood, next to the Council gate, one of the gates of the al-Aqsa Mosque.

Nasser Qous, head of the Jerusalem Office of the Palestinian Prisoners Society (PPS) said the soldiers invaded the African neighborhood area during clashes with local Palestinian youths in the al-Wad Street.

The soldiers also attacked her brother, Mahmoud, when he tried to help his wounded sister. Medical sources said Mahmoud suffered fractures in his leg.

Mahmoud and his sister were moved to the al-Makassed Islamic Hospital in Jerusalem or treatment.

In addition, dozens of Palestinians suffered the effects of tear gas inhalation, during clashes that took place in the Shu’fat refugee camp after several Israeli military vehicles invaded it, while one Palestinian was shot by a rubber-coated metal bullet in the chest, near the Sports Club in the City.

More clashes also took place in at-Tour neighborhood, in the Old City of occupied Jerusalem, after the army invaded it for the second time in less than 24 hours.