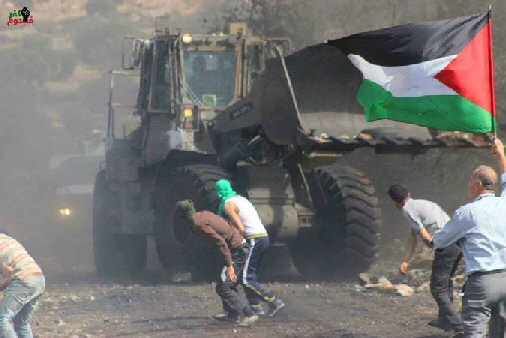 Israeli soldiers again attacked weekly peaceful marches which took place in several Palestinian villages and towns, across the occupied West Bank.PNN reports that, during Friday’s weekly demonstration in Bil’in, near Ramallah, two participants were injured as dozens of others suffered from teargas inhalation, according to local sources.

26-year-old Fedaa Ataya was injured in her leg by an Israeli tear gas canister while Rema Jauabra 28, was injured by sound grenades, also in her leg. Dozens more suffered from from tear gas inhalation.

The demonstration was launched with slogans against Israel’s continued policy of land theft, the apartheid wall and in support of resistance against the illegal occupation.

Local sources report that Israeli forces threw dozen of dozen tear gas canisters, followed by sound grenades and rubber-coated metal bullets, in an attempt to stop the march. The demonstration also aimed to express popular dissent aginst the Israel’s continuous persecution during the olive harvesting season as both settlers and soldiers, this week, prevented Palestinians from entering their lands, set olives on fire and confiscated acres of farmland all over the West Bank, with the aim of further settlement expansion.

To the south of Bethlehem, in Almaasara, the weekly demonstration against the wall and settlements began at the center of the village and moved towards the entrance, which was blocked by a large number of Israeli soldiers.

As the protesters neared the entrance, the soldiers launched a massive tear gas and sound bomb attack to push demonstrators back, yet a few individuals kept pushing until they reached route 60, which is the main road connecting settlements in the area. Demonstrators blocked the road for an hour before the soldiers forced it open.

Popular resistance committees in the area stated that they will not stop until they free their village and reclaim the land which was stolen from them.

Meanwhile, in the village of Kufr Qadoum, a number of Palestinians required medical treatment, also due to tear gas fired in an attempt by Israeli forces to disperse protests.

As protesters approached a road which had been previously closed, Israeli forces attacked them with tear gas, rubber-coated metal bullets and sewage water.

The coordinator of the rally stressed that the Kufr Qaddoum march had brought victory to al-Aqsa Mosque, which is being subjected to repeated brutal aggression by both Israeli settlers and soldiers alike.

He noted that the occupation deliberately sprayed houses with waste water, now, instead of digging up the road and throwing dirt on people’s homes.

Despite recent denunciations against the PA, by Ramallah-based Hamas leader Saed Abu Bahaa, for their part in Israel’s continued attacks on al-Aqsa, Palestinian President Mahmoud Abbas, along with PM Rami Hamdallah and Hamas chief Khaled Mashal, is urging Palestinians to defend the mosque.

On Saturday, WAFA reports that several Palestinians in the town of Ya‘bad, to the west of Jenin also suffered from excessive tear gas inhalation during an Israeli army raid on the town, according to reports by security sources.

Israeli forces raided the town, during the early dawn hours, amid a barrage of tear gas and acoustic canisters fired toward residents.

Forces also set up a flying military checkpoint in the neighborhood of al-Malool, where they routinely stopped passing vehicles and checking identity cards. (Note that Palestinian license plates are different in appearance to those of Israeli Jews, so as to make vehicles more easily identifiable. Roads are segregated, as well.)