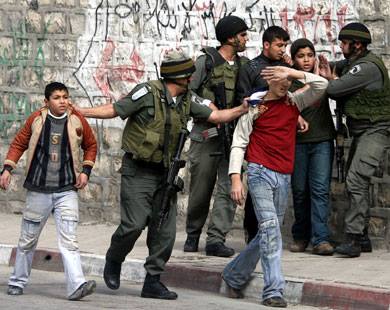 Palestinian medical sources said several residents have been injured by army fire in renewed clashes that took place with Israeli soldiers invading various neighborhoods and towns in the occupied city. At least five, including a child, have been kidnapped.Dozens of soldiers and police officers invaded the Chain Gate (Bab al-Silsila), the town of at-Tour, and the Shu’fat refugee camp, in addition to a number of neighborhoods in the Old City.

The soldiers invaded Asaliyya and Sharha neighborhoods in the Old City, and attacked several Palestinians before kidnapping four.

One of the Palestinians, identified as Hamza Khalaf, was injured in the head when the soldiers assaulted him before kidnapping him.

Another kidnapped Palestinian has been identified as Mohammad Sharha; soldiers also kidnapped two of his relatives.

In the at-Tour town, soldiers kidnapped a child identified as Ibrahim al-Hedra, after the army invaded the town, and clashed with local youths.