Five, Including A Physically Challenged Man, Kidnapped In Hebron 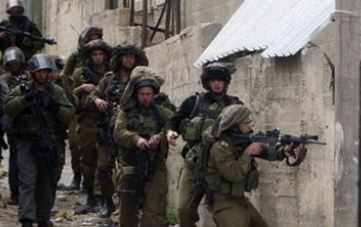 Several Israeli military vehicles invaded, on Sunday at dawn, Hebron city, in the southern part of the West Bank and Beit Ummar nearby town, broke into a number of homes, and kidnapped five Palestinians, including a paralyzed man.Mohammad Awad, spokesperson of the Popular Committee Against the Wall and Settlements in Beit Ummar, stated that the soldiers invaded a number of homes, searched them, and kidnapped two identified as Ziad and his brother Mahmoud Bader Ekhlayyel, 35 and 28 years of age.

Awad added that, in 1994, Ziad was shot by an Israeli soldier in his spine, causing paralyses, while his brother is a former political prisoner, who spent two years in Israeli prisons.

Abdul-Rahman al-Juneidi and Mohammad Ayad Awad, 27, were abducted in the Hebron area as well. In both instances, soldiers smashed the doors of the homes of those abducted.

The kidnapped Palestinians were cuffed, blindfolded and were moved to the Etzion Israeli military and security base.

In related news, a number of military vehicles invaded the Deheishe refugee camp, south of Bethlehem, and handed Mohammad Abdullah al-Ja’fari, 43, a military order for interrogation at the Etzion military base. The soldiers also searched and ransacked his home.