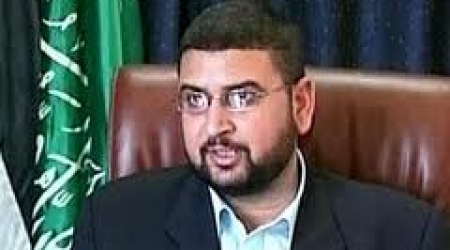 On Friday, while addressing attendees at the second congress of the Fateh party, Abbas called on Palestinians to stay at the mosque, located in occupied East Jerusalem, to guard it against the escalating Israeli violations against it and the worshippers who attend services there.

Tensions continue to linger between Hamas and the Palestinian Authority President, despite the recent reconciliation deal between factions.

According to Al Ray, Mr. Abu Zuhri stated that Abbas’ invitation for defending Al-Aqsa contradicted the practices of Palestinian security agencies, saying that these agencies ‘suppress’ Palestinians who defend Al-Aqsa Mosque on the streets of the occupied West Bank.

‘Palestinian Authority agencies also continue to make the resistance hand-tied and prevent it from carrying out its duty of defending Jerusalem and Al-Aqsa Mosque,’ he said in a press release.

Radwan himself called on worshipers in Jerusalem to resist and defend the sanctuary:

However, he also called on the PA to stop its continued security coordination with Israel and to act on Israeli attacks at the holy site.

Hamas chief-in-exile Khaled Mashal also recently called on Palestinians to defend al-Aqsa, while member of the subcommittee on civil liberties formed after the West Bank-Gaza unity government was sworn in in June, Khalil Assaf, told Ma’an News Agency that, regardless of the committee’s formation, none of its recommendations have been implemented..

According to Assaf, Palestinian Authority police regularly detain dozens of people in the West Bank due to their political affiliation.

Palestinian policemen, on Friday, dispersed related Hamas-organized protests in a number of cities in the occupied West Bank.