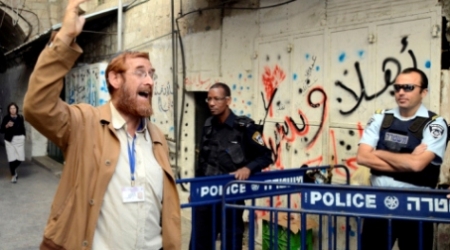 Israeli settlers known as “Students for the Temple Mount”, on Sunday, again broke into Al-Aqsa Mosque compound, under the protection of special police guards.WAFA correspondence from the Old City, in occupied East Jerusalem, said that the group, known for its provocative religious and political views, toured the mosque’s yards, provoking worshipers whose entry rights have become increasingly restricted in recent months.

Identity cards were retained until worshippers left the mosque and further restrictions were imposed to limit their access to the site.

According to WAFA, “Students for the Temple Mount” announced two days ago that it would organize a tour in the mosque, in solidarity with extremist Israeli rabbi Yehuda Glick, a licensed tour guide and founder of the “Haliba movement”, who was banned from entering the compound.

Glick has been banned repeatedly from the site for performing unwelcomed rituals in the yards of the mosque. While police have reportedly tried to obtain a permanent court ban against Glick, the High Court of Justice has rejected the request.

“Students for the Temple Mount”, which consists of hard-line university students, is led by Israeli extremists Rachel Tito and Tommy Nisani among others.

The Mughrabi Gate has witnessed numerous confrontations between Palestinians in the Old City and Israeli police, who have additionally raided a number of homes as a result.

The PNN reports that Palestinian President and Fateh member Mahmoud Abbas said, on Saturday, that legal measures would be taken to prevent settlers from continuing to invade the mosque, saying that the attacks are a desecration on the holy site.

‘The Palestinian leadership will be taking the necessary legal measures, at the international level, regarding the aggression of settlers on the Al-Aqsa mosque,’ Abbas said in a speech to the Revolutionary Council of the PLO.

‘We will not allow settlers to attack the mosque,’ he added, referring to the entire compound, which is the third holiest site in Islam.

On Friday, Abbas pledged to bar settlers from entering the al-Aqsa compound by any means.