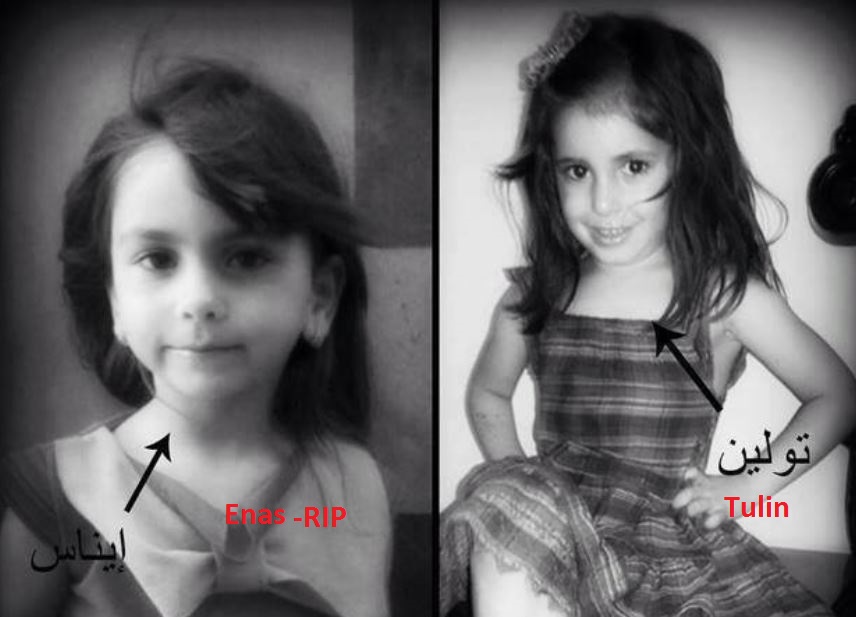 Ali Dar Ali – Palestine TV – Enas Dar Khalil did not want to wake up that day to go to school, but she had no idea what was awaiting her just a few hours later; it was her last time to wake up ever, as a settler took her life and then sped away in a deliberate hit and run.“Earlier this morning Enas woke up feeling cranky; she didn’t want to go to school,” her mother said, “Mom, let me please just sleep some more, so I did. Then later I woke her up again; she didn’t want to wake up. I insisted that she go. It was almost as if she is as if she felt she was going to die. She went to kindergarten, and she died.”

The child, Enas Shawkat Dar Khalil, 5, died that day leaving behind her schoolbag, in it were some books, her latest grades, and a doll, she wanted to give to her teacher, and a small empty wallet where she used to store her allowance.

“She is gone, gone… my child. She was strong; she wanted to live; she raised her arms and head, and she wanted to get up (after being struck by the car, but she couldn’t, I ran towards her, and held her…”

The bereaved mother saw her five-year old daughter taking her last breath, a scene that will forever be haunting her, and all that she has left to embrace is memories, clothes, books and toys of her deceased daughter.

Enas left this life instantly and her body was moved to the Palestine Medical Center, while her friend Tulin Omar ‘Asfour, 5, who was holding her hand as the two girls walked home from kindergarten, suffered a very serious injury when they were both rammed by a speeding settler driving near their town, Sinjil, located near the Central West Bank city of Ramallah.

“We were standing in front of our home; the girls were walking back home; they wanted to cross the road; a settler was driving and saw the girls,” an eyewitness said, “He rammed them with his car; they were pushed for nearly 10 meters. He wanted to ram them again, but he saw us running after the girls, then he just sped away and disappeared.’

The criminal settler committed his crime and escaped, leaving behind the story of Enas, that her mother is telling to the world, her story written in blood, about how childhood is executed, and how innocence is slain, in her occupied homeland, called Palestine.

In this spot, the child received martyrdom; the existence of settlements in occupied Palestine is an inexcusable violation, the settlers driving on the roads split through the occupied land is an unbearable death for the people of Palestine, yet, the struggle of this nation continues until liberation.
From Sinjil village, this is Ali Dar Ali – Palestine TV.

[Editor’s Note: Bypass roads used by Israeli settlers in the occupied West Bank are the most dangerous roads for indigenous Palestinians as the settlers speed through them, while the Palestinians largely have no alternative route and no safe sidewalks, as the settler roads are under the complete control of the Israeli occupation army.

Despite the large number of similar incidents in various parts of the occupied West Bank, the police and the army largely fail to conduct proper investigations, and the assailants mostly remain at large without any legal ramifications.]

Link To Original TV Report In Arabic By Palestine TV