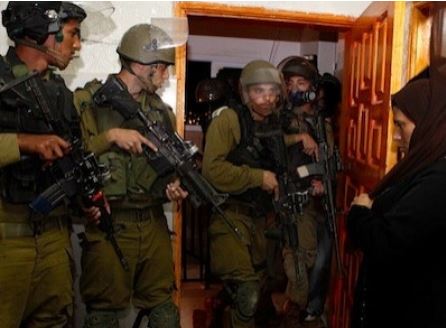 Israeli soldiers invaded, on Monday at dawn, various communities in different parts of the occupied West Bank, and kidnapped seven Palestinians, including a journalist, after invading their homes and ransacking them. One Palestinian kidnapped late on Sunday.Local sources said dozens of soldiers invaded Ni’lin village, west of the central West Bank city of Ramallah, and kidnapped a journalist working for the al-Aqsa Satellite TV.

The journalist has been identified as Mustafa Abdul-Razeq al-Khawaja.

His brother said several Israeli military vehicles surrounded their home, before breaking into it and ransacking its property, adding that the soldiers trashed the place and walked around with their muddy boots due to heavy rain, and took his brother to the Ni’lin roadblock, before moving him to an unknown destination.

Soldiers also invaded the al-Fawwar refugee camp, south of Hebron, and kidnapped a man and his son, after searching their homes.

The two have been identified as Mustafa Abdul-Qader Abu ‘Awwad, 60, and his son Ehab, 21.
Several military vehicles also invaded the al-Khader town, south of Bethlehem, searched many homes, and kidnapped Maher Mohammad Ghneim, 24, before confiscating his computer.

Soldiers also installed a military roadblock at the entrance of Doura town, south of Hebron.

In addition, soldiers invaded the Teqoua’ town, east of Bethlehem, and kidnapped a Palestinian identified as Saber Rebhy al-’Amour, 23, after breaking into his home and ransacking its property.

On Sunday evening, a Palestinian was kidnapped at a temporary roadblock, installed by the army at the main junction of Sanour village, south of the northern West Bank city of Jenin.

The Kidnapped has been identified as Fathi Rasmi Jarrar, 27, from Sanour.

The five have are Ahmal Khalaf, 35, her brothers, Mousa, 31, and Hamza Khalaf, 24, in addition to Ahmad and his brother Mohammad Sharha.

They were kidnapped on Saturday at night after the soldiers invaded homes in the Chain Gate (Bas as-Silsila), and violently assaulted several family members, wounding Hamza, before kidnapped the women and the four men.