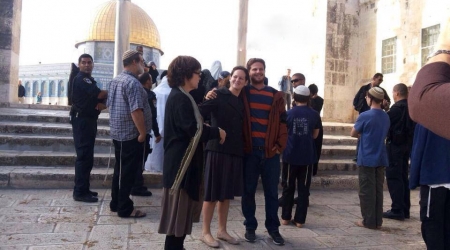 The Israeli parliament of the Knesset is expected to decide on a new bill, this coming month, which would impose both a temporal and spatial division of al-Aqsa Mosque compound between Muslims and Jews, said Israeli sources. In the South Hebron Hills, Israeli forces continue to deny Palestinians access to their land. while illegally allowing colonial settlers to build there.According to WAFA correspondence, the bill will give Jews permission to pray at al-Aqsa Mosque as part of a proposed motion of equal right to worship for both Muslims and Jews. However, the bill aims to specify certain times and places for Jews to perform prayers and Talmudic rituals.

The bill additionally calls for banning protests against Jewish entry into the compound and imposing penalties upon whoever organizes or participates in such actions.

Meanwhile, Israeli forces continue with their policy of denying Palestinians access to their land in the Southern Hebron Hills, attacking owners and activists and illegally allowing Israeli settlers to take over and build structures on Palestinian-owned land, according to a press release by Operation Dove.

Palestinians in the region have been denied access to their land since 2001, as forces repeatedly declare the areas to be ‘closed military zones’.

In solidarity with the community, Jewish and international activists have joined Palestinians in non-violent demonstrations in protest of the illegal Israeli measures.

Such demostrations are routinely suppressed, as Israeli force attack and abduct peaceful protesters under the pretext of entering ‘restricted areas’.

On October 18th of this year, Israeli forces were reported to have violently suppressed two non-violent actions organized by the South Hebron Hills Popular Committee.

The first of these incidents took place in the area of Umm al-Arayes, located near the illegal Israeli outpost of Mitzpe Yair, while the second occurred in the village of Susiya, near the Suseya settlement.

These protests were organized in demand of the right for Palestinians to access their own land, which is under constant threat of dispossession for the sole benefit of settlement expansion.

In Umm al-Arayes, Palestinian landowners, accompanied by Israeli activists and international volunteers, gathered in demand of the right to access their land. Forces blocked protesters, declaring the area as a closed military zone, while abducting two Palestinians and four Israeli activists.

During a similar action on Saturday, Israeli activists were brutally attacked by settlers from ‘Mitzpe Yair’ settlement, as seen in the video below.

Furthermore, in Susiya, Palestinian landowners, alo accompanied by Israeli activists and international volunteers, marched on their land to protest the continued settlement expansion.

WAFA reports that, for the third Saturday in a row, Palestinians dismantled a tent which was built illegally by Israeli settlers, in the place they used to gather every afternoon in an attempt to prevent owners from accessing their land and using the water well.

The Israeli army declared the area ‘military closed’, violently pushing away Palestinians and activists as they resisted peacefully the evacuation of the area, in Israeli settlers’ presence.

Palestinians from the South Hebron Hills are steadfast in their struggle to claim justice and to put an end to the ongoing seizure of their land.