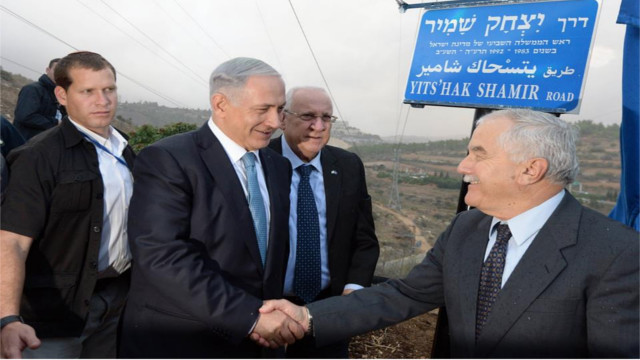 Israel’s construction in Jerusalem will continue, Prime Minister Benjamin Netanyahu said on Sunday, speaking at the inauguration of a new road to be named after the late Prime Minister Yitzhak Shamir, famous for his hawkish views.

“Prime Minister Shamir emphasized at every opportunity the need to ensure the unity of all of Jerusalem, and he laboured to make it into a dynamic city. Of course, he defended Israel’s natural right to build there. Is it possible, he asked, that a Jew would not be able to build a home in Jerusalem? Can we be forbidden to build in our capital, the city of our forefathers? We must allow all – Jews, Christians, and Muslims – to develop and build in Jerusalem,” Netanyahu said.

The Yitzhak Shamir road inaugurated by Netanyahu is part of the Jerusalem ring road system, which here will link the settlements located to the northeast of Jerusalem, including Ma’ale Adumim and Adam, to the road to Motza outside of Jerusalem and on toward Tel Aviv. It will shorten the travel time between Jerusalem area settlements and Tel Aviv, while providing additional connectivity for the settlements to Jerusalem itself.

Palestinians are further discriminated against in allocation and distribution of the municipal budget. The Jerusalem municipality does not publish relevant figures regarding the allocation of resources to Jewish and Palestinians in Jerusalem, claiming it is not in the interest of the city to maintain data on these obscure and ambivalent issues. However, most Palestinian neighborhoods in East Jerusalem lack basic infrastructures and residents are not connected to the municipal sewage system.

Despite the lack of aggregated data, examination of Jerusalem’s published budget reveals an official discriminatory policy in each of its chapters.

The data reveals that although the Palestinian community in Jerusalem represents almost 40 percent of Jerusalem’s population, they receive less than 10 percent of the municipal budget.

Despite facts and figures highlighting Jerusalem as a segregated city, Netanyahu championed the legacy of the late premier, saying Shamir “emphasized at every turn our obligation to safeguard Jerusalem’s unity. He worked tirelessly to turn it into the vibrant center of our country”.

“Under Israeli sovereignty, Jerusalem is a unified city that is open to all”, Netanyahu added.

“There are those who seek to cause dissent, to rebuild the walls within its center. We will not allow this to happen, we will stand strong against all the forces that seek this and fight them with an iron hand,” he threatened the Palestinian residents of the city.

“The violence is taking place mainly in the eastern part of the city, in fact almost exclusively there. We are not prepared to have rocks hurled in the Israeli capital and we’ll take all the necessary measures to clamp down on this.”