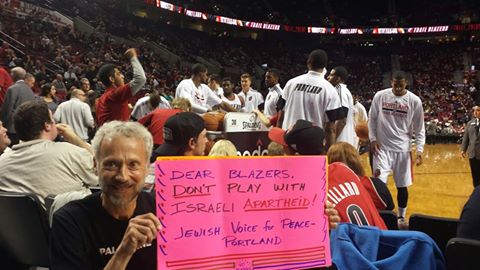 Basketball fans joined with human rights supporters in several U.S. towns to call for a boycott of Israeli sports teams, and to challenge what they call a ‘public relations tour’ by Israeli teams in the U.S. They gathered outside and inside the exhibition games to try to bring attention to the ongoing Israeli military occupation of Palestine.In Cleveland, Ohio, dozens of protesters chanted and held signs outside the exhibition game last week, and a similar protest took place on Friday in Portland, Oregon.

According to organizers, “These teams represent the injustice and occupation of Palestine. While this team travels freely, Palestinian athletes are denied that same right.

“The Israeli basketball tour is a PR campaign to cover up the horrific massacre of the past summer that killed over 2100 people in Gaza, including over 500 children. In some cities the games are being used as a fundraiser for the Israeli military. That is the same military that continues to occupy Palestine, kill indiscriminately, and deny Palestinian citizens the right to live freely and with justice.

“The image of the 4 young boys killed by Israeli bombs while playing soccer on the beach is Gaza is forever engraved in our hearts. We won’t let this tour be a smokescreen over the ongoing horror of the occupation of Palestine.

The groups protesting the games say that they are calling for a boycott of Israeli sports teams and events to call for freedom, justice and human dignity for the Palestinian people, who are living under an Israeli military occupation.

In Cleveland, the exhibition game was accompanied by a fundraiser for the Israeli military – the only foreign military that is allowed to hold fundraisers in the U.S., and accept direct contributions from U.S. citizens.

The Cleveland basketball team, the Cavaliers, recently hired as its head coach David Blatt, who came to the job after serving as head coach of Maccabi Tel Aviv (the team featured in the exhibition game). Blatt called the recent Israeli invasion of Gaza that killed over 2100 people, including 500 children, “Israel’s most justified war”.

The Ohio basketball boycott action follows an ongoing controversy at the University of Illinois, in which a professor who expressed support for Palestinian equal rights on Twitter was denied employment. Recent releases of documents related to the case show a close relationship that could constitute a conflict of interest between members of the university and Zionist leaders in the community. The documents also revealed that the University President lied about the sequence of events in the case.