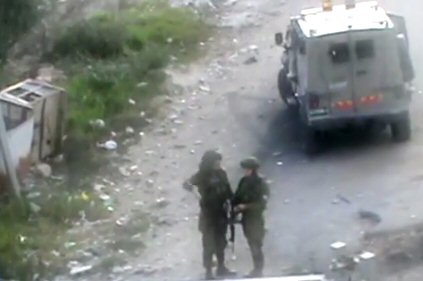 On October 19th, Israeli soldiers briefly detained a developmentally disabled Palestinian boy, who is under the age of criminal responsibility, on suspicion that he had thrown stones. The boy, A. a-Rajbi, (full name withheld in interest of privacy) who will be 12 in a month, was detained after Palestinian children threw stones at soldiers on the main road of the Jabel Johar neighborhood in Hebron, close to the settlement of Kiryat Arba.

A-Rajbi was handcuffed, blindfolded, and held on the floor of an army jeep for some 15 minutes until his father arrived and convinced the soldiers to release his son, who is mentally disabled and cannot speak.

In the video footage, filmed by B’Tselem volunteer Samih Da’na from his window, soldiers are seen holding the boy, handcuffing him, blindfolding him and closing him in the jeep, despite cries by Palestinian residents that the boy is mentally disabled.

The footage also shows settlers from Kiryat Arba, watching the incident from behind the settlement’s fence. Some are seen calling out encouragement to the soldiers, including several racist remarks.