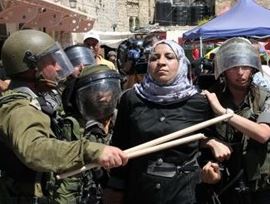 Israeli soldiers and police officers kidnapped, on Wednesday evening, nine Palestinian women while leaving the Al-Aqsa Mosque in occupied Jerusalem, and took them to a police station in the Old City.Eyewitnesses said dozens of soldiers were deployed around the al-Aqsa mosque, and its yards, since noon hours Wednesday, and stopped many Palestinian women leaving the mosque, before kidnapping nine of them.

All kidnapped women were moved to the al-Qashla Police station in the Old city of occupied East Jerusalem.

The army also handed two women, identified as Latifa Abdul-Latif and Wahba Sarhan warrants ordering him to head to the Police station for interrogation, Thursday.