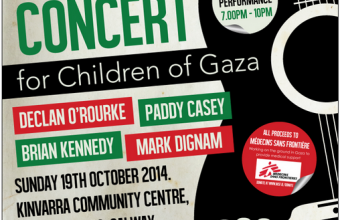 A very special concert featuring Declan O’Rourke, Paddy Casey and Brian Kennedy, with support from Mark Dignam, in solidarity with children in the Gaza Strip took place in Kinvara, Ireland, on Sunday 19 October.The Palestinian News Network (PNN) reports that the concert was attended by the Ambassador of Palestine in Ireland, Ahmad Abdelrazek, with proceeds benefitting Médecins Sans Frontières for their direct and impartial work on the ground providing medical support and care in Gaza.

Knivara is a sea port small village located in the south of County Galway, with a population of around 1,500.

During the Israeli war on Gaza in the summer of 2014, the people of Kinvara, businesses and consumers took a collective stand against Israeli actions in Gaza, by pledging to support the growing boycott movement against the state of Israel.

This personal initiative led an action from the Galway County Council to commit to an urgent appeal to the Minister of Foreign Affairs in Ireland, by asking that the Irish government take action in calling for an immediate end to Israeli attacks against the people of Gaza, and for a cessation of the Israeli-imposed illegal siege on the region.

During the concert, Ambassador Abdelrazek, expressed his gratitude to the audience and to musicians and organizers of the initiative by presenting them with symbolic gifts from Palestine.