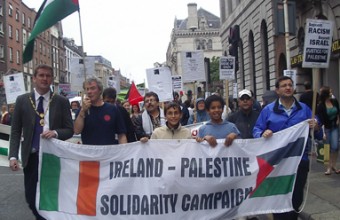 The Ireland-Palestine Solidarity Campaign congratulated, today, Seanad Éireann on passing a motion calling on the Irish Government to formally recognize the State of Palestine.The motion, which was tabled by Sen. Averil Power and supported by Senators from all parties, as well as independents, was passed this afternoon without a vote, according to the PNN.

The Minister for Foreign Affairs and Trade, Mr. Charlie Flanagan TD, will come before the Seanad in November, to further discuss the issue.

IPSC Spokesperson Freda Hughes announced: ‘We welcome this move on behalf of Seanad Eireann which follows similar recent votes in the British and Swedish parliaments.

‘This is an important expression of support for Palestinian statehood and peace in the region in a highly symbolic, yet extremely effective, manner.’

Ms. Hughes continued, ‘We hope this motion will increase support for a similar vote in Dáil Éireann in the near future. International recognition of the State of Palestine is an important symbolic gesture that will increase diplomatic pressure on Israel to end the occupation.’

In conclusion, Ms. Hughes stated that ‘While symbolic actions such as this recognition are important and welcome, they are not a substitute for concrete and meaningful action. The IPSC continues to urge the Irish government to impose political and economic sanctions on Israel until it ends its occupation of Palestine and abides fully by its obligations under international law.’