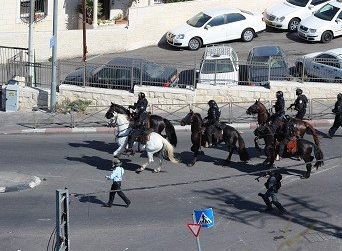 Palestinian medical sources in occupied East Jerusalem have reported that scores of residents have been injured during clashes that took place in different parts of occupied Jerusalem following noon prayers, after the soldiers and police prevented thousands from entering the al-Aqsa Mosque.Soldiers kidnapped three children, including a physically challenged boy.

Eyewitnesses said protests took place in different parts of East Jerusalem, and in several nearby towns, after the soldiers prevented thousands from entering the al-Aqsa and its yards for Friday prayers.

Hundreds also took to the streets protesting the death of Abdul-Rahman Shalloudi, who was killed Wednesday, after the police claimed he deliberately rammed his speeding car into Israelis waiting for the light rail, while many reports indicated he might have lost control of his vehicle due to high speed wounding seven, and killing a 3-month-old baby.

The clashes took place in many Palestinian communities in Jerusalem, including Wad al-Joz, Silwan and the al-‘Isawiyya towns.

The Radio Bethlehem 2000 said undercover Israeli police officers, and soldiers have kidnaped three Palestinian children, including a disabled child, and took them to a police station in the city.

The three have been identified as Mohammad Rashed al-‘Ajlouni, 14, his relative Mohammad, and Mohammad Abu ‘Asab.

Clashes also took place in Ras al-‘Amoud after the soldiers fired bombs, concussion grenades and rubber-coated metal bullets targeting worshipers who had to pray in the street after being prevented from entering the al-Aqsa Mosque.

More clashes also took place in the al-‘Isawiyya town, while many Palestinians suffered the effects of teargas inhalation.

Late on Thursday evening, soldiers invaded a residential building in Wad al-Jouz, and attacked many Palestinians before firing gas bombs and rubber-coated bullets into the homes.

Eyewitnesses said the soldiers invaded the building during clashes that took place in Wad al-Jouz, and attacked several men, women and children.

A 12-year-old child, identified as ‘Awni Es’eeda, was shot by a rubber-coated metal bullet in the abdomen, while resident Nasser Es’eeda, 47, suffered fractures in his arm after the soldiers beat him with their rifles and batons.

The soldiers also assaulted ‘Adnan Es’eeda who suffers from a heart condition and kidnaped two Palestinians identified as Hazem Es’eeda and Ahmad Salayma.

Earlier on Friday, the army imposed various restrictions on the entry to the al-Aqsa Mosque, preventing all Muslim men below the age of forty from entering the mosque or its yards, while hundreds of soldiers and undercover forces were deployed all over the city and its nearby villages and towns.

Thousands of Palestinians performed Friday prayers in the streets of Wad al-Jouz, Ras al-‘Amoud, Al-Misrara and Salah Ed-Deen Street, while the police and soldiers took pictures of the worshipers, especially the young men.