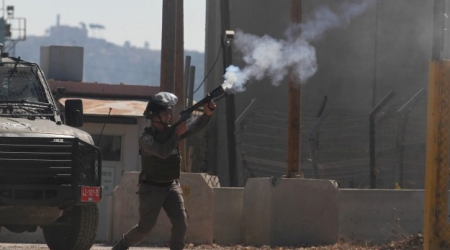 Israeli police clashed with Palestinians in occupied East Jerusalem, on Saturday, just ahead of the funeral of a man who drove into a crowd, Wednesday, killing an Israeli baby.Tensions in the region were further stoked by news of a West Bank teenager who was shot dead by police, on Friday, in addition to the recent and all-too-familiar reports of two small children being rammed by a settler car in Sinjil. (5-year-old Einas Khalil did not survive the attack.)

Police were reportedly ‘ready for anything’ Saturday, according to AFP, after Israeli settler vehicles were hit by rocks on roads around Ramallah, and disturbances in East Jerusalem prompted four forced detentions overnight.

However, little attention has been given to the recently escalating settler attacks targeting not only Palestinian adults and their property, but children and teenagers, as well.

Shaludi was shot dead by police as he fled on foot, according to AFP. Palestinian sources said he was scheduled to be buried in Jerusalem, at 10:00 pm on Saturday.

Public radio asserted that the timing was set by Israeli authorities, who imposed a maximum limit of 80 mourners ‘for fear that the event could turn into a violent protest’, as is typical for such venues, as Israeli police and settlers are want to provoke mourners into further confrontations.

According to Ma’an News Agency, Israeli Minister of Internal Security Yitzhak Aharonovich recently announced that sanctions would be imposed on Shaludi’s family in Silwan. Israeli news website Ynet reported Friday that, according to the minister, the house of Abd al-Rahman Shalloudi would either be sealed or demolished.

In Silwan, on Saturday, locals threw stones at a sanitation vehicle that was sent to clean up debris from Friday’s round of stone throwing there, upon which police met the crowd with tear gas, stun grenades, and rubber-coated steel bullets, in typical fashion.

Near East Jerusalem’s Shu’fat refugee camp, protesters targeted the light rail with more stones, as locals consider it to be a symbol of Israel’s further annexation of the occupied area. A carriage window was reportedly damaged, but no one was injured.

In related West Bank news, relatives of Palestinian teenager Orwa Hammad, shot dead Friday, announced that his funeral would take place on Sunday, to allow his father time to travel from the United States, where he is a resident citizen.

See: 10/24/14 Another Palestinian Teen Killed by Israeli Forces near Ramallah

The Israeli child killed on Wednesday was also a US citizen, Washington reportedly confirmed.