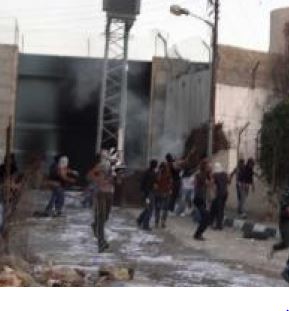 Palestinian medical sources have reported, Friday, that many residents, including a child, have been injured after Israeli soldiers attacked a nonviolent protest at the northern entrance of Hebron city, in the southern part of the occupied West Bank.Eyewitnesses said hundreds of Palestinians marched in the city protesting the ongoing Israeli violations, mainly the repeated attacks on the al-Aqsa Mosque in occupied Jerusalem, before the soldiers fired dozens of rubber-coated metal bullets and gas bombs at them.

Medical sources said several residents were injured, including a child, 7 years of age, who suffered a moderate injury and was moved to a local hospital.

In related news, clashes took place near the ‘Aida refugee camp, north of Bethlehem, after several Israeli military jeeps attempted to invade it.