Another Palestinian Teen Killed by Israeli Forces near Ramallah 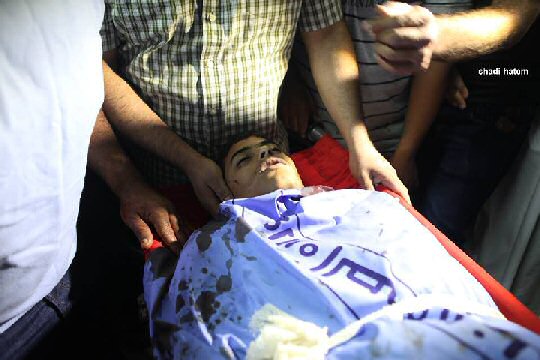 Israeli forces shot and killed a Palestinian teenager during clashes, late on Friday, in the village of Silwad, near Ramallah, in the occupied West Bank.Medical sources said that ‘Arwa Abdul-Wahab Hammad, age 14, was shot by a live round in his head, and died of his wounds in a local ambulance transferring him to the Palestine Medical Center in the city.

A spokeswoman from the Israeli army claimed that soldiers in the area fired at a Palestinian adult who was hurling a Molotov cocktail at forces, according to Ma’an News Agency, who reports that the boy also held American citizenship..

Eyewitnesses said that Hammad was shot in the head by an Israeli army sharpshooter at a close range, while the army alleged that the child “hurled tried to throw a Molotov cocktail at the soldiers. The soldiers held his body for a while, before eventually handing it over to Palestinian medics.

Medical sources said five Palestinians were injured, four by rubber-coated metal bullets, and one with a live round, while many suffered the effects of tear gas inhalation.

Dozens of soldiers were deployed near a military post, installed at the western entrance of the town, also leading to confrontations with local youth.

Clashes have also been reported in different parts of the occupied West bank.

It is worth mentioning that resident Nabil Qaddoura Hammad, the boy’s uncle, was killed during the first Palestinian Intifada.

Just last week, Bahha Samier Bader, age 13, was killed while playing football with his friends, in nearby Beit Liqya, when invading soldiers opened random fire at residents and their homes.