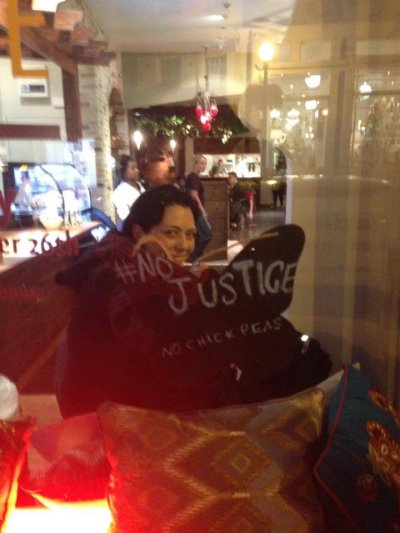 A group of protesters gathered outside the ‘Hummus House’ restaurant in Washington DC earlier this week to denounce the company’s ties to the Israeli army. Customers, including one man wearing an Israeli flag, were showered with chants such as “Sabra Sabra, you’re no good / Leave the Georgetown neighborhood!” and “1,2,3,4 Sabra is supporting war / 5,6,7,8 They make Gaza suffocate.”

The hummus company’s half-owners, the Strauss Group in Israel, proudly sponsor the Golani and Givati brigades of the Israeli army, notorious for their behavior and their participation in what human rights organizations have suggested are war crimes. Sabra is also criticized for the Strauss Group’s appropriation of a historically Palestinian / Arab cuisine, now largely marketed as Israeli.

The Golani Brigades are notably implicated in Israel’s August bombardment of the Shuja’iyeh neighborhood of Gaza that left dozens dead in a single night. The brigade is also notorious for producing and wearing racist t-shirts, particularly one featuring a bullseye covering a pregnant, presumably Palestinian Muslim, mother and the caption ‘One Shot, Two Kills.’

Sabra Hummus products have faced protests across the United States in groceries, at universities, and even at a Chicago-area high school. These campaigns are part of a growing movement for boycott, divestment, and sanctions targeting Israel, called for in 2005 by over 170 Palestinian civil society organizations in the spirit of the movement that helped end apartheid in South Africa.