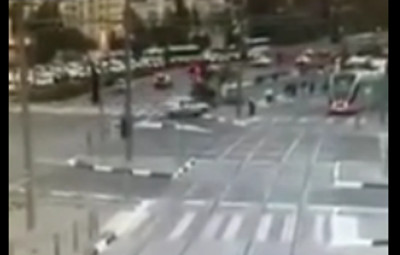 As Israeli right-wingers continue to gather at the site of the death of a 3-month old baby on Wednesday, reports from the police investigating the incident and eyewitnesses on the scene indicate that the incident was a hit-and-run car accident, not a deliberate attack.21-year old Abdul-Rahman Shalloudi had been at the clinic earlier on Wednesday complaining of a fever and illness. He had returned home and gone to bed, but then went back out and was driving too fast on a Jerusalem road when he ran into a group of pedestrians with his car.

He tried to flee the scene of the crash, but was shot dead by Israeli police.

While this incident has made media headlines throughout the world, a similar incident this past Sunday, in which two five-year old Palestinian girls walking home from school were hit by an Israeli settler vehicle, killing one and critically wounding the other, has not received much press.

The settler who killed the 5-year old girl also fled the scene of the crash – he was later apprehended by Israeli police, but was not charged with any crime. Israeli police determined (without interviewing any of the numerous Palestinian witnesses who were on the scene) that it was an accident, and no charges were filed.

Abdul-Rahman Shalloudi’s cousin Abed Shalloudi told reporters with the Israeli paper Ha’aretz, “We believe that he was shot and killed in cold blood and there was no attempt to question him, and hear his side of the story, and that he deserves a funeral like everyone else.” The body of Abdul-Rahman Shalloudi remains in Israeli police custody, and the family has not been able to hold the funeral yet.

The cousin of the deceased man added, “ I still believe that he had an accident. If he wanted to carry out an attack, why did he wait until he got there? The videos don’t show that it was definitely an attack, and he might have lost control of his vehicle. For the Israelis, that’s an attack, and they shoot him to death.”

A video posted on social media, filmed from an angle above the highway, shows the car crossing the center line and hitting pedestrians who were walking in the median.

A statement by the family of the driver, published on the Israeli news website Ynetnews, states, “We are certain that this was a regular car accident. Over the past few days he did not feel well and it could be due to his illness that he lost control of the wheel. Many similar accidents have occurred in many places and there was no suspicion of a terrorist attack.”

“A few days ago a Jewish settler knocked over two girls near Ramallah. He killed one and the other is in serious condition. The police immediately said it was a car accident. In our case they said the opposite in seconds. This is because the driver was an Arab driver. When a Jewish driver was involved in an accident the attitude was different and no one shot him.”

The U.S. government immediately labeled the incident a ‘terrorist attack’, with State Department spokesperson Jen Psaki saying, “The United States condemns in the strongest possible terms today’s terrorist attack in Jerusalem.” She said that the baby who died in the incident was reportedly a U.S. citizen.

In the clashes that have followed Wednesday’s incident, another U.S. citizen child, 14-year old Orwah Hammad from New Orleans, was killed. He was shot in the head by Israeli forces on Friday.

Political analyst Rania Khalek, in an article published in The Electronic Intifada on Friday, pointed out the disparity in media coverage between Palestinians killed in ramming incidents, either deliberate or accidental, and Israelis killed in similar incidents – which are always assumed to be politically motivated attacks and not accidents.

She gives the example of,“Raed al-Jabari, a 35-year-old Palestinian father and husband, [who] hit Israeli settlers with his car in the Gush Etzion settlement bloc in late July. Al-Jabari insisted it was an accident and turned himself in to the police, reported Ma’an News Agency. But unlike the settler who killed Inas Khalil (the five-year old girl killed this past Sunday), al-Jabari was jailed for two months and ultimately died under suspicious circumstances. Israeli authorities claim al-Jabari hanged himself in the bathroom at Israel’s Eshel prison, but the autopsy suggests the man was tortured to death, according to Palestinian officials.”

Khalek notes that the Palestinian representative to the United Nations filed a complaint after the ramming of the two girls on Sunday, noting that there has been an increase in the number of deliberate attacks against Palestinian civilians by Israeli settlers using their vehicles as weapons in the last two months.