Funeral of Shalloudi Held In Jerusalem 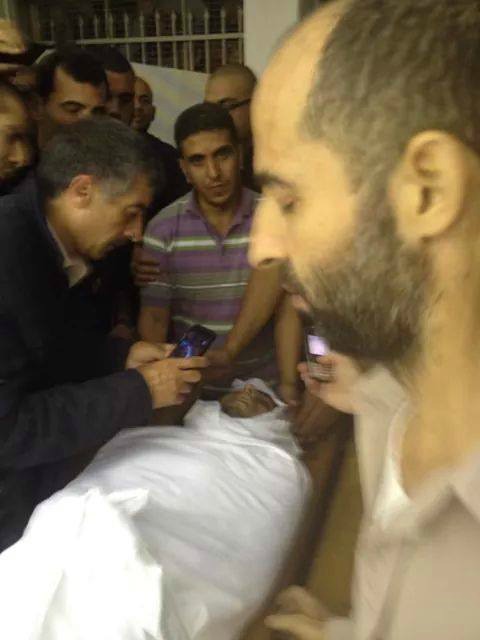 Family members of Abdul-Rahman Shalloudi and a few dozen Palestinians from Jerusalem who managed to reach his home despite the strict military siege, held the funeral ceremony of the slain Palestinian, just before midnight Sunday.Local sources said the Israeli army handed the body of Shalloudi to his family around 11 at night, while dozens of soldiers were deployed in Palestinian neighborhoods, and around the Yousifiyya Graveyard near al-Asbat Gate.

The Israeli Police imposed restrictions on the number of Palestinians who could participate in the funeral, and instructed the family that only 55 persons would be allowed to attend.

The Police also prevented the family from holding funeral prayers in the mosque, an issue that forced them to perform the prayers outside, as they buried him in the cemetery.

On Sunday evening, nine Palestinians were injured and four were kidnapped, during a symbolic funeral procession starting in front of Shalloudi’s home in Silwan town, heading towards the Al-Aqsa Mosque.

Political parties, and local youth groups in occupied Jerusalem, called for the procession to challenge the Israeli restrictions on the number of persons who could attend the funeral itself.

The police attacked the mourners by firing gas bombs, concussion grenades and rubber-coated metal bullets at them, in addition to spraying them with wastewater, while mounted police officers assaulted many of the mourners as well.

Medical sources said nine Palestinians were injured; eight of them were moved to local clinics and hospitals, while the police also kidnapped a wounded teen.

Clashes also took place in Silwan town, south of the Al-Aqsa Mosque in occupied Jerusalem; two Palestinians were injured, and the police kidnapped three others after invading their homes.

The Palestinian News & Info Agency (WAFA) said the police fired gas bombs at a number of homes and sprayed them with wastewater.

Abdul-Rahman Shalloudi was killed Wednesday; the police claimed he deliberately rammed his speeding car into Israelis waiting for the light rail, while many reports indicated he might have lost control of his vehicle due to high speed wounding seven, and killing a 3-month-old baby.

Shalloudi was at the clinic earlier on Wednesday complaining of a fever and illness. He had returned home and gone to bed, but then went back out and was driving too fast on a Jerusalem road when he apparently lost control of his car and ran into a group of pedestrians.

While this incident has made media headlines throughout the world, a similar incident this past Sunday, in which two five-year-old Palestinian girls walking home from school were hit by an Israeli settler vehicle, killing one and critically wounding the other, has not received much press.