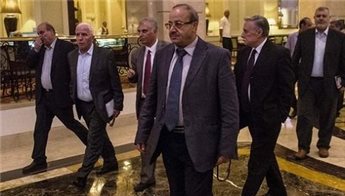 The indirect ceasefire talks with Israel, which were to resume on Monday, in Cairo, have been postponed until the second half of November, according to the head of the Palestinian negotiations team.Mr. Azzam Al-Ahmad said tthat he Egyptian officials sponsoring the negotiations postponed them due to an ongoing military operation in northern Sinai and the closure of the Rafah border crossing.

A deadly assault occured in the region, this past Friday, in which around 30 Egyptian soldiers were killed in a car bombing and an armed attack which followed.

Earlier, a spokesman for Hamas, Mr. Fawzi Barhoum, told Ma’an News Agency that Egypt had informed officials of the postponement.

‘It’s Egypt that will set a new date for indirect talks brokered by Egypt, and Hamas will be invited to that round of talks,’ he said.

Egypt responded to the attacks by imposing a curfew on North Sinai, closing the Rafah crossing and bombing suspected militant targets in the peninsula.

On August 26, President Mahmoud Abbas announced an end to a 50-day ruthless Israeli offensive on the Gaza Strip, following serious negotiations between the Palestinian and Israeli sides in Cairo.

Whereas the announcement declared an end to the fighting, discussion of other issues, including the establishment of an airport and a seaport in Gaza, as well as ending the tight Israeli blockade, were put off until further rounds of negotiations on a permanent ceasefire, WAFA reports.

For details on events leading up to this summer’s conflict, see this weekend’s articles in Opinion/Analysis