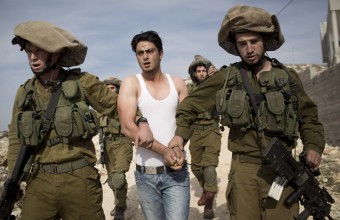 Israeli forces abducted, over Saturday night and Sunday morning, some 19 Palestinians from the Hebron, Jerusalem and Nablus districts in the occupied West Bank.The Palestinian Prisoners’ Club said that the arrest campaigns were concentrated in Hebron and Jerusalem, according to the PNN.

In Hebron, army forces stormed Beit Ummar, to the north of the city, where they a conducted large-scale search and raided several homes, taking six local residents in the town including two brothers; four of whom were identified as Basil Abu Hashem, 18, Mohammad Abu Maria, 19, and brothers Ahmad and Ibrahim Sabarneh. PNN reports that 10 citizens, total, were taken from Hebron.

Israeli forces also invaded the nearby town of Beit Awwa, to the southwest of Hebron, kidnapping Mohannad Abu-al-Ghalazi, 24, and Basem Masalmeh, 35, and leading them to an unknown destination.

A father, Mohammad Shalaldeh, 45, along with his son, 24-year-old Amr, were also taken after an army raid on the town of Sair, south of Hebron, late in the night.

Also taken was Rashid Abu-Rumuz, age 21, in the Hebron city.

In thein the nearby town of Dora, the army summoned a number of ex-detainees and ordered them to appear for interrogation before Israeli intelligence.

Amjad Najem was abducted from the village of Qabalan, to the south of Nablus, while he was on his way to work in the city, and attempting to cross an Israeli army checkpoint.

Israeli police in Jerusalem arrested a woman who attempted to enter al-Aqsa Mosque compound in the city. The woman, identified as one Samiha Jodah, was led to a nearby police station.

Police also abducted and severely assaulted an elderly name Abdullah Shami, before leading him to a nearby detention facility. Palestinian youth Dia Dawood was also taken after police raided his home in the Old City, earlier on Sunday.

Meanwhile, a group of settlers invaded the mosque in another provocative tour, where they assaulted a number of Palestinian women and verbally abused them. Islamic Waqf guards were reportedly able to fend off the settlers and force them out the mosque.

The offensive comes amid growing tension in the holy city which has been on the rise for the past few months, with an unprecedented spike in the last two weeks, WAFA reports.

Israeli police kidnapped at least eight Palestinians and injured tens other, during confrontations which erupted on Saturday night in several Jerusalem neighborhoods, in protest of the delay in turning over the body of 20-year-old Abdul-Rahman Shaloudi and imposing conditions on his burial.

According to the Director of Wadi Hilweh Information Center (WHIC) Jawad Siyam, fierce clashes took place in most of Silwan’s neighborhoods, to the south of al-Aqsa Mosque compound, the harshest of which occured in Ras al-Amud, Bi’r Ayub, Ein al-Lawzi, Athwari, and Suweh.

At least five were taken, three of whom were identified as Mahmoud Gaith, Mahdi al-Abasi and Nimir Bashir.

Mr. Siyam stated that hundreds of Palestinians in the area suffered from severe tear gas inhalation, during crowd dispersals by Israeli police. He also said that an infant has inhaled a large amount of the gas, putting her in a critical condition.

WAFA further reports that, in Beit Hanina, to the north of Jerusalem, Israeli police arrested three young men amid ongoing confrontations which erupted in the Old City of Jerusalem, in addition to the Shu’fat refugee camp, al-Isawiya , Jabal al-Mukabir and Al-Tur (Mount of Olives).

With the escalation of bloodshed which has marked the past weeks, in addition to ongoing land seizure, home demolitions, and attacks on farmers during the olive harvest season, tensions in Jerusalem are rapidly escalating threatening of further violence and murder.

Search the IMEMC archives for details.