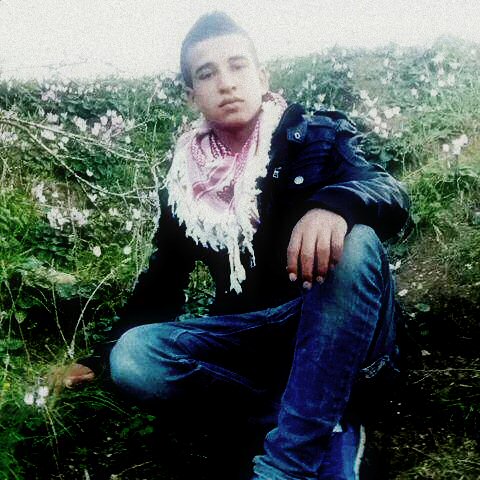 His father is in the United States; his mother in Jordan, and he is a martyr bleeding on Palestine’s soil. ‘Orwa Abdul-Wahab Hammad uttered his last breath among Israel soldiers who shot him in an ambush, while hiding behind olive trees.

The bullet fired by one of the soldiers, from nearly 400 meters away, targeted the throat of the teenager, and exited from his neck. He fell onto the ground motionless.

It all began when the young Palestinians heard the shot, causing to them run for safety. And, when they gathered again, they did not see Hammad; they had no idea as to what could have happened to him.

This is when they started wondering about his fate, and why he wasn’t there with them.

After they fired the shot, the soldiers left their hideout and ran towards the wounded boy, preventing residents and our team from approaching to help, or even documenting the attack.

The boy was left bleeding his life away for half an hour, uttering the last breaths of his life surrounded by soldiers who thought it was a good idea to take pictures and videos of him, using their mobile phones, before Palestinian medics were finally allowed through, to take him to the Palestine Medical Center in Ramallah.

The ambush, set up by two Israeli soldiers, took place a couple of hours before sunset and, by nightfall, when darkness covered the area, Abdul-Wahab was standing with his comrades at the main entrance of his town, Silwad.

No soldiers could be seen in the area, and this was the moment of his execution by the soldiers who concealed themselves behind the trees, benefiting from the utter darkness.

Clashes with the Israeli army, this week, did not pose any danger to the lives of the occupation soldiers, and were not the strongest or most tense of clashes in comparison to those which Silwan town has witnessed in past days.

The scenes were semi-normal, save for the presence of an Israeli army sharpshooter with a dark heart, seeded with death; in his weapon, a crime scene — a fun game for the army — while the teen, ‘Orwa Abdul-Wahhab, was uttering his last breaths, embracing Palestine with his blood, watering its soil …with his blood.