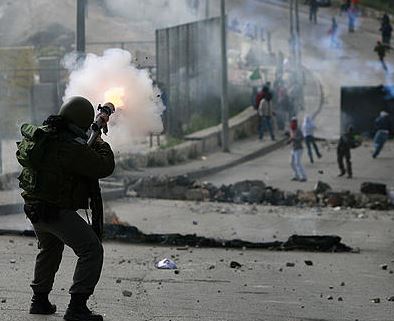 Israeli soldiers violently attacked, and kidnapped, on Friday evening, a Palestinian field researcher in the Old City of occupied East Jerusalem, as he was documenting clashes taking place between dozens of soldiers and local Palestinian youths.The kidnapped researcher, Ahmad Sob-Laban works for a local human rights organization; he is also specialized in Israeli settlements’ affairs.

Clashes took place in different parts of occupied East Jerusalem, including Silwan, Jabal al-Mokabber and the Old City, while Sob-Laban was documenting the clashes before the soldiers assaulted him.

At least 30 Palestinians were injured by Israeli rubber-coated metal bullets, while dozens suffered the effects of tea gas inhalation, including seven members of two families.

The family members were injured after the soldiers targeted several homes causing fire in two homes, but the residents managed to extinguish the fire before it spread. The seven were moved to to a local hospital.