Egypt to Build Gaza Buffer Zone, Thousands to Be Displaced 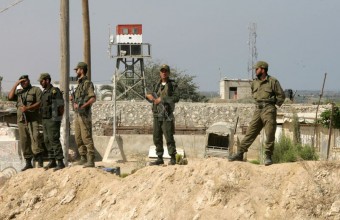 Egyptian authorities have announced a recent decision to build, along its borders with Gaza, a buffer zone with the depth of 500 meters, and a height of 14 km, with the aim of hindering militants from entering Sinai.A deadly assault occured in the region, this past Friday, in which some 33 Egyptian soldiers were killed, causing the border to be closed and delaying further truce negotiations until mid-November.

According to the Palestinian News Network, construction of the zone will result in the displacing of thousands of Bedouins in the Sinai desert. Egyptian officials have vowed to relocate and offer compensations before beginning the construction.

Egyptian president, Abdul Fattah Sissi, promised to take ‘many measures’ on the border, now likely to be expanded in order to pursue militants and stop them from entering Egyptian land.

Sissi expects additional aid from the US in stopping ‘terror’ in Egypt.