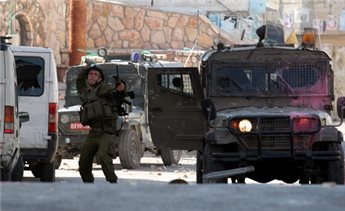 Two Palestinian teens were injured during clashes with Israeli forces to the east of the occupied West Bank city of Nablus, early Monday, according to medical sources.The director of the Palestinian Medical Relief Society told Ma’an News Agency that the violence broke out following an invasion by several Israeli military vehicles into the village of Beit Furik.

The two teenagers,16-year-old Alaa Rajeh Hanini and 17-year-old Saddam Salameh Hanini. were reportedly injured by rubber-coated steel bullets and taken to a nearby hospital for treatment.

An Israeli army spokesman told Ma’an that he would ‘look into the incident’.

Israeli forces kidnapped six Palestinians in the West Bank overnight, according to reports by the Bethlehem branch of the Palestinian Prisoner’s Society.

An Israeli army spokesman told Ma’an that six Palestinians were arrested overnight — one northwest of Nablus, three in Bethlehem’s Aida refugee camp, and two in the village of al-Khadr near Bethlehem.