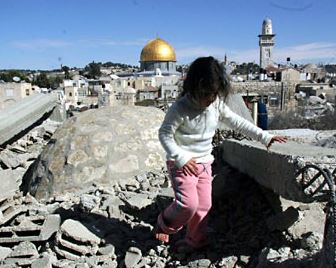 The Israeli Jerusalem City Council demolished, Tuesday, a Palestinian home in Salah ed-Deen Street, in occupied East Jerusalem rendering eight family members homeless. Sahar Sharif and her family were forcibly removed from their home, and were detained by the police, near their building, until the destruction of their home was completed.

The family was prevented from talking to anybody, while Israeli soldiers and officers surrounded the entire area.

The family lived in the 40 square/meter home since 1996, and received several demolition orders since then, but managed to delay the destruction through a lawyer, while Israel repeatedly imposed high fines reaching to more than 300.000 NIS in the last 17 years, the Maan News Agency said.

Sahar said that, two years ago, the family had to demolish a section of the building as ordered by the Jerusalem City Council, leaving them with one room to live in, until the police demolished the entire structure, Tuesday.

On Tuesday afternoon, the army kidnapped a Palestinian, identified as Jamal ‘Asaliyya, near the al-Aqsa Mosque, in the Old city of occupied Jerusalem, and took him to an interrogation facility.

The soldiers also handed three mosque guards warrants ordering them to head to a police station in the city for interrogation. The three have been identified as Arafat Najeeb, Ashraf Abu Rmeila, and Haitham an-Nammari.