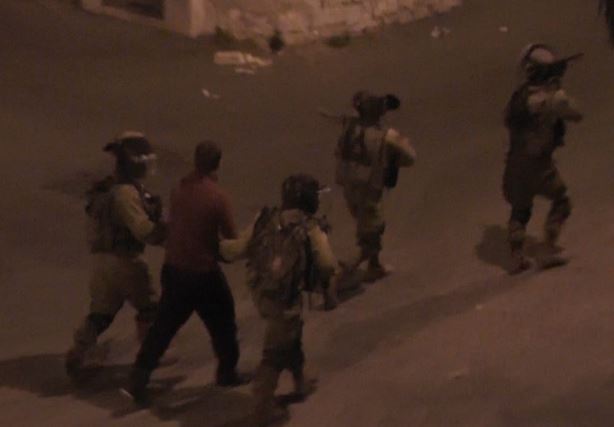 Israeli soldiers kidnapped, on Wednesday at dawn, twelve Palestinians in different parts of the occupied West Bank, and occupied East Jerusalem, after storming various communities and searching homes. Soldiers also demolished a cave used by a family in Jerusalem after the army demolished their home.Media sources in Jenin, in the northern part of the West Bank, said dozens of soldiers invaded a number of towns, south of the city, and kidnapped eight young Palestinian men, after ransacking their homes.

The sources said the army kidnapped Bilal Ahmad Sharqawi and Ahmad Mazen Turkman, from Ya’bad town, after stopping them at a nearby roadblock.

Also in Ya’bad, soldiers detained two brothers identified as ‘Aref and Jamil Mohammad Abu Salah, and interrogated them for several hours before releasing them.

In Jaba’ nearby town, soldiers kidnapped Mahmoud Mustafa Khaliliyya, 35, his brother Mohammad, 45, and Mahmoud Nayef Maharma, 30, after storming their homes and a workshop they worked at, and confiscated motorcycles and spare parts.

Several military vehicles also invaded the town of ‘Aqraba, south of the northern West Bank city of Nablus, and kidnapped Sameh Ghaleb Jaber, 31, after storming his home and searching it.

In occupied Jerusalem, soldiers demolished the entrance of a cave, used by a Palestinian family that Israeli demolished its home, in Silwan town, south of the Al-Aqsa Mosque.

The soldiers also kidnapped Khaled and Fahmi az-Zeer, who lived with their families in the caves, and violently assaulted them causing various injuries.

In addition, soldiers and the police surrounded al-‘Abbasiyya and al-Bustan areas, and kidnapped one resident identified as Morad Gheith, before taking him to an interrogation center in the city.

On Tuesday evening, four Palestinians have been injured by Israeli army fire, on Tuesday evening, in Ya’bad town, south of Jenin; one of the wounded suffered a serious injury. http://www.imemc.org/article/69547