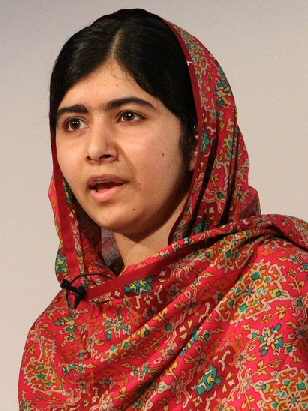 Nobel Peace Prize Laureate, Malala Yousafzai, has announced that she is donating 50,000 US dollars to rebuild an UNRWA school damaged during the recent fighting in Gaza. Ms. Yousafzai made the announcement from Stockholm, where she has gone to accept the prestigious World’s Children’s Prize. The amount represents all the prize money.Photos and the speech, as delivered by Ms. Yousafzai, will be available on the UNRWA website later this evening. Meanwhile, please feel free to use the version of her speech below and the statement in response to her donation by the UNRWA Commissioner General, Pierre Krähenbühl.

REMARKS BY MALALA YOUSAFZAI ON HER DONATION OF 50,000 US DOLLARS TO UNRWA:

I am honored to announce all my World’s Children’s Prize money will go to help students and schools in an especially difficult place – in Gaza.

I am donating these funds to The United Nations Relief and Works Agency for Palestine Refugees, which is performing heroic work to serve children in Gaza, in very difficult circumstances.

The needs are overwhelming – more than half of Gaza’s population is under 18 years of age. They want and deserve quality education, hope and real opportunities to build a future.

This funding will help rebuild the 65 schools damaged during the recent conflict.

Innocent Palestinian children have suffered terribly and for too long.

We must all work to ensure Palestinian boys and girls, and all children everywhere, receive a quality education in a safe environment.

Because without education, there will never be peace.

Let us stand together for peace and education because together we are more powerful.

This morning I sent the following e-mail to the Nobel Peace Prize Laureate, Ms. Malala Yousafzai.

We are so deeply touched by your decision to donate USD 50,000, the entire amount of the prestigious “World’s Children’s Prize”, towards rebuilding an UNRWA school in Gaza damaged during the recent fighting.

Recognition by you, a Nobel Laureate, who has shown so much personal courage and has campaigned so valiantly for the essential right of a child to receive an education, will lift the spirits of a quarter of a million UNRWA students in Gaza and boost the morale of our more than nine thousand teaching staff there. Their suffering during the fighting was devastating and your kindness will do much to ease the pain of recent months.

UNRWA shares with you the profound belief in the importance of education as a means to lift young girls and boys out of isolation, exclusion or oppression. Acquiring skills and knowledge to improve prospects for the future is profoundly engrained in the Palestinian consciousness. I wish therefore to accept your generosity and solidarity with deep gratitude and humility, on behalf of UNRWA itself, on behalf of all of our education staff in Gaza and on behalf of the children of Palestine.

You have become a symbol of the boundless potential that lies within each and every child on earth. You are an aspirational figure to the next generation in Palestine and beyond. You are an inspiration to all of us.

With my very sincere and respectful wishes,